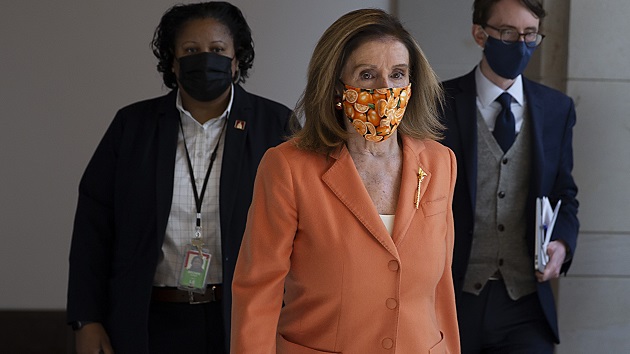 (WASHINGTON) — House Democrats, who have accused President Donald Trump of acting erratically as he battles the coronavirus, on Friday will introduce a proposal to establish a panel to determine a president’s fitness for office under the Constitution’s 25th Amendment.

The move comes after House Speaker said Thursday President Donald Trump was in an “altered state,” but has said it likely wouldn’t apply to him.

The measure would create an expert panel – with members appointed by Democratic and Republican leaders of the House and Senate – to conduct a medical exam at the direction of Congress to “determine whether the President is mentally or physically unable to discharge the powers and duties of the office,” according to the text of a version of the proposal introduced in 2017 by Rep. Jamie Raskin of Maryland.

Raskin, a former constitutional law professor and member of the House Judiciary Committee, said the panel would include doctors as well as former presidents and Cabinet secretaries, who would each serve four-year terms.

“The population is getting older, politicians are getting older,” he said in an interview earlier this week. “It’s not hard to think that there will be future situations where the president’s physical and mental state may create issues for us. So, we just need to make sure that we have a structure and a process in place to address it.”

Pelosi, who will reintroduce the measure with Raskin on Friday, has repeatedly expressed concerns in public and private this week about President Trump’s health amid his treatment for COVID-19.

Trump, at the direction of his doctors, has been taking dexamethasone, a steroid used to reduce lung inflammation in COVID patients, that can, in some cases, prompt psychiatric side effects, including mood swings, rage and psychosis.

“The president is, shall we say, in an altered state right now,” Pelosi said Thursday during an interview with Bloomberg TV. “I don’t know how to answer for that behavior.”

She continued, “There are those who say when you are on steroids or have COVID-19, there may be some impairment of judgment.”

Dr. Sean Conley, Trump’s doctor, who has provided little information about the president’s condition and repeatedly contradicted himself in press conference over the weekend, claimed to reporters on Monday that Trump has not displayed any neurological symptoms from the coronavirus, or side effects from his treatment.

Republicans on Thursday accused Pelosi of trying to undermine the president after she alluded to the new proposal in her weekly news conference. Trump re-tweeted several of their messages on Twitter.

I wouldn’t put it past @SpeakerPelosi to stage a coup.

She has already weaponized impeachment, what’s to keep her from weaponizing the 25th amendment?

.@SpeakerPelosi will stop at NOTHING to take down @realDonaldTrump.

First it was the Russia hoax, then sham impeachment. Now she’s trying to invoke the 25th amendment because he… fully recovered from the coronavirus?

We won’t let her get away with it.https://t.co/L9fRPFpynC

Pelosi, despite her misgivings about Trump, has not called for invoking the 25th Amendment against him, and said Tuesday night the proposal would likely apply to future presidents.

“I don’t say that would work for this president but I do think, well, for this presidency, you know, three and a half months, but we can establish it for the future so there’s much more clarity and a backstop,” she said at a livestream event hosted by the 92nd Street Y in New York City.

Ratified in 1967 after the assassination of President John F. Kennedy, the 25th Amendment outlines procedures for a transfer of presidential power to the vice president in the cases of death, incapacitation, removal or resignation.

The amendment says the determination of whether a president can discharge their duties would be determined by the vice president and a majority of Cabinet secretaries or “such other body as Congress may by law provide,” which Raskin said his proposal is designed to establish.

The amendment states: “Whenever the Vice President and a majority of either the principal officers of the executive departments or of such other body as Congress may by law provide, transmit to the President pro tempore of the Senate and the Speaker of the House of Representatives their written declaration that the President is unable to discharge the powers and duties of his office, the Vice President shall immediately assume the powers and duties of the office as Acting President.”

“Congress has not yet set up such a body but I think that we should,” Raskin told ABC News. “I wish it had been done after the 25th Amendment was adopted in 1967.”

Amber Riley is engaged: “I’m looking at a man who changed my mind” about “love”
Pete Davidson, Ed Asner and more starring in virtual reading of ‘It’s A Wonderful Life’
As he ignores election defeat, Trump to pardon turkey
Mary Steenbergen says her ‘Happiest Season’ character was very familiar to her
Georgia to begin Trump campaign-requested recount of presidential contest Tuesday
Children at higher risk of household poisonings amid coronavirus pandemic, experts warn