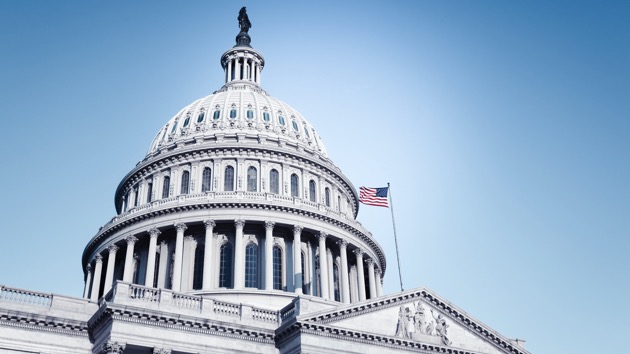 (WASHINGTON) — House Speaker Nancy Pelosi on Thursday threw cold water on the prospects of a standalone airline relief bill the White House wanted, saying the goal is for negotiators to strike a broad, comprehensive bipartisan deal to address the public health crisis and the economy.

Her comments at a morning news conference came amid a back and forth with the White House this week, after President Trump effectively called off negotiations with Democrats before reversing course again on Twitter.

Trump later urged negotiators to pass standalone bills to address ailing industries like airlines and restaurants, and to send $1,200 direct payments to Americans.

“The comment I made to the administration last night was: We’re happy to review what that standalone bill would look like as part of a bigger bill — if there is a bigger bill,” Pelosi said during her weekly press conference.

“But there is no standalone bill,” she added.

The White House and Democrats have for months failed to agree on terms for another coronavirus stimulus relief package. Democrats have called for Congress to pass a $2.2 trillion plan, whereas Republicans have scoffed at the price tag and are uneasy about adding to the national debt.

Treasury Secretary Steven Mnuchin countered with a $1.6 trillion package. He and Pelosi had been negotiating since last week about a comprehensive deal before Trump called off those talks, taking Pelosi and others by surprise.

Pelosi and Mnuchin continued this week to negotiate a smaller, more focused bill to address the airlines, which have furloughed tens of thousands of employees since Oct. 1, but Pelosi on Thursday tamped down expectations for that bill and called for a comprehensive bill to be passed instead.

“We told the White House, ‘We’re at the table. We want to continue the conversation. We’ve made some progress. We’re exchanging language.’ So we’ll see how we connect,” Pelosi said.

Those talks with Mnuchin on a comprehensive are currently stalled because Democrats are still waiting on the administration to respond to their latest offer.

“We have our differences in numbers, but it’s no use of having just a numbers discussion unless we know what that money is spent on,” she said.

“We’ve been working very hard on language, because if you don’t have the language you’re just giving them a blank check to do what they have done, which is ignore crushing the virus,” she added.

Trump on Thursday said “very productive” talks are underway and expressed optimism that a deal could be reached.

“Well I shut down talks two days ago because they weren’t working out. Now they are starting to work out, we’re starting to have some very productive talks,” Trump said in an interview on Fox Business Network.

He said he believes Pelosi “wants it to happen, because it’s so good for our country, we really need it.”

Pelosi, for her part, continued to blame Trump for his erratic behavior in recent days.

“When the president did his strange tweet that said we’re walking away from the negotiations, I was like, ‘what?’ I think he surprised a lot of people. I don’t want to go into who they are right now,” Pelosi said.

‘The Queen’s Gambit’ is a winning one for Netflix
White House planning holiday parties indoors despite pandemic warnings
Suspect arrested, charged with murder for Sonic Drive-In shooting that killed two, injured two
How one university system plans to send home thousands of students for Thanksgiving break
People in need turn to GoFundMe amid pandemic, holidays
Amid politics and pandemic keeping families apart, how to keep peace at Thanksgiving