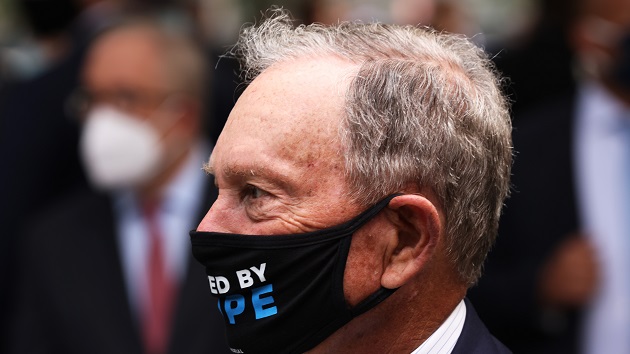 The latest push comes as Biden is locked in a close race with President Donald Trump in Florida, a state the president won in 2016, but has struggled to match former President Barack Obama and Hillary Clinton’s popularity with Latino voters in the state.

The first ad in the $500,000 effort, which will begin running Thursday on Spanish-language television stations in Tampa and Orlando, will spotlight Biden’s work on the Affordable Care Act and the economic recovery after the Great Recession as vice president, while focusing on his commitment to help Puerto Rico’s recovery from damaging hurricanes and its ongoing economic crisis.

“We need to vote for Joe Biden as president so he can help unify the country, take our small businesses forward and respect and help the Puerto Ricans on the island,” Miranda says in the ad.

The award-winning actor, director and musician behind “Hamilton” and “In The Heights” will also partner with Bloomberg on a number of upcoming Spanish and English-language radio ads for the campaign with United for Progress PAC, a progressive political action committee focused on mobilizing Latino voters. The ads will run through Election Day.

Bloomberg has already deployed some of his $100 million Florida pledge to help get-out-the-vote efforts aimed at courting and mobilizing Latino and Black voters in Florida for Biden.

He’s already spent tens of millions on television advertisements in the state attacking Trump’s record on the coronavirus and efforts to repeal Obamacare, along with his history of critical comments about Puerto Rico and its leaders.

A recent Quinnipiac poll found Biden leading Trump 51%-40% among likely voters, with Biden ahead of the president with Hispanic voters 51%-37%.

Another poll from The New York Times and Siena College found Biden leading Trump 47%-42% among likely voters, and 58%-34% among Latino voters.

Trump, who defeated Clinton in Florida 49%-47%, is hoping to keep the state in GOP hands with a strong showing with Cuban voters, who traditionally lean Republican and have helped Republicans win narrow victories statewide in recent years.

According to Pew, Cuban American turnout is among the highest in Latino voter groups, and made up 29% of eligible Hispanic voters in Florida in 2018, followed by Puerto Ricans, who made up 27%.

Both campaigns have focused their resources and candidates’ time in the state in the final weeks in the race, with Biden making stops in Miami on Monday to court Cuban and Haitian American voters.

Democrats believe that a Biden victory in Florida — which is more likely than other battleground states to have results on election night given absentee ballot processing rules — could deny Trump a viable path to 270 electoral votes, and a second term in the White House.