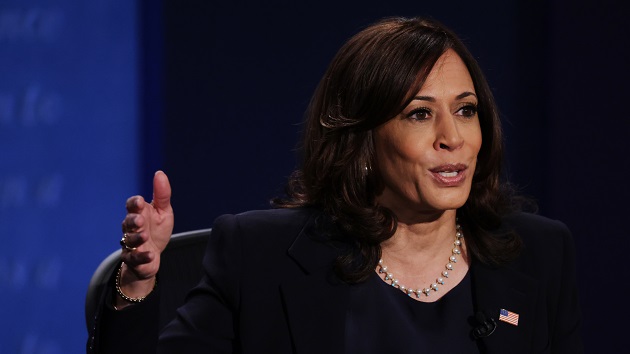 (SALT LAKE CITY) — Ahead of the vice presidential debate, 11-year-old Celeste Harley decided to play dress-up. With her mother’s blue blazer, pearl necklace and heels she strode across her very own debate stage (her family’s driveway) and offered remarks to a crowd of onlookers (her mother).

“When I become vice president, I want to help all the American people. I want to deliver health care for all, equality and justice under the law,” Celeste said while waving to a pretend crowd.

“I had to laugh,” Erinn Harley, Celeste’s mother told ABC News. “Because I thought, ‘Wow, she really has been studying Kamala Harris very closely, she even had that wave."”

For Celeste, the vice presidential debate was the first time she, and many other young women of color saw themselves represented at that level on the political stage.

Democratic vice presidential nominee Kamala Harris is the first black woman and the first woman of Indian descent to be nominated for national office by a major political party.

Celeste’s mother remembers holding her newborn daughter in the hospital on election night as Obama gave his acceptance speech.

“It was a moving moment for me,” Erinn Harley said. “When I was 11 I didn’t have anybody standing on that American political stage, not at this level. So it’s certainly, for me, moving history forward.”

I was excited to see someone who looks like me.

The video her mother shared now has almost 500,000 views on Twitter alone. Sen. Harris tweeted a reply to the video saying: “She has my vote. Tell her to keep leading.”

She has my vote. Tell her to keep leading.

Today is Role Model Day at my daughter’s school and she chose Senator @KamalaHarris and I cannot *even* 😍 pic.twitter.com/EtXWOJw9nF

“I am grateful for our country’s resiliency, that my daughter can be instilled with true hope by leaders fighting to build a country in which she can thrive,” Chandler told ABC News.

Other young girls of color across the United States were able to look at the debate stage last night and envision themselves taking similar future steps.

“She’s half Indian like me!” Amy Lakhani’s six-year-old daughter Leena told her mom looking at the TV screen.

“Can u send a picture of me to Kamala Harris? She’s half Indian like me!” Thank u, @kamalaharris , for being a model of intellect, empathy, compassion, experience, & unification.

My 6-yr-old wants me to post our # so @kamalaharris can text, but I’ll draw the line there. pic.twitter.com/7OY2LwbYka

Leena, who is in first grade and wants to be a lawyer one day, is currently learning about elections and Leena’s asked her mother why the United States has only had “man presidents.”

“For kids, it’s like, wait a minute, what about me? What about our population? Where are we represented?” Amy Lakhani said. “So last night, watching the debates it just felt really momentous. … We don’t have to only look for past examples in books, but we can see a living example.”

“I was excited to see someone who looks like me,” Leena said. “We need more girl leaders.”

Leena wants to tell Harris, “Thank you for setting a good example for all the girls out there.”

From last night’s debate stage, Harris addressed the nation’s young people saying, “I love hearing from our young leaders … I know our future is bright.”