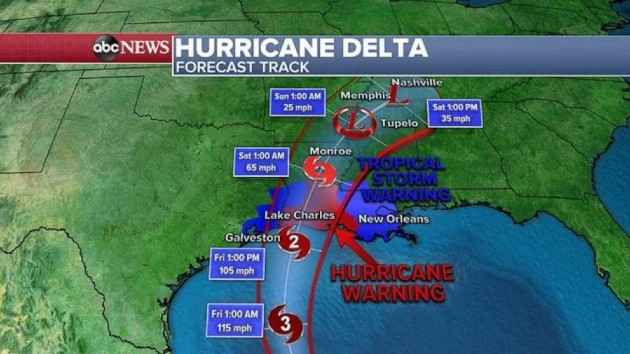 (NEW YORK) — Hurricane Delta is turning north toward the Louisiana coast where it’s expected to slam the shoreline on Friday.

Landfall is expected Friday evening near Cameron, Louisiana, which was hit hard by Hurricane Laura in August.

A hurricane warning has been issued for western and central Louisiana, including as far inland as Alexandria, Louisiana. A tropical storm warning was issued for New Orleans and for Galveston, Texas.

The biggest threat besides hurricane-force winds will be the storm surge that could get as high as 11 feet. A storm surge warning is in effect for Louisiana and Mississippi.

States of emergency have been declared in Louisiana, Alabama and Mississippi.

Once Delta moves inland, heavy rain will move into central and northern Louisiana, southern Arkansas and western Mississippi. Some areas could see six to 12 inches of rain in a matter of hours, causing flash flooding.

Heavy rain could also impact the Tennessee River Valley on Saturday. Up to three inches of rain is possible in Tennessee.

When Hurricane Delta makes landfall, it will break the record for most storms to make landfall in one season in the continental U.S.