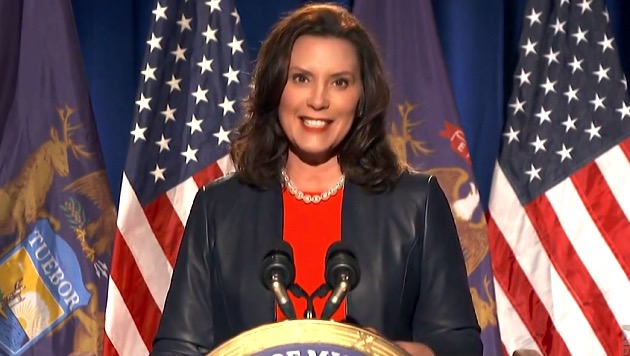 Handout/DNCC via Getty Images
Posted on October 8, 2020 by ABC News

The FBI said it first learned of the group’s plot in early 2020 and began embedding confidential sources and undercover agents to monitor the individuals’ activities.

Authorities were to expected to hold a news conference later in the day to reveal more details.

They were arrested Tuesday by law enforcement.

Federal prosecutors said the militia group was already on the FBI’s radar because in March 2020 they were “attempting to obtain the addresses of local law enforcement officers.”

“At the time, the FBI interviewed a member of the militia group who was concerned about the group’s plans to target and kill police officers, and that person agreed to become a [confidential source],” according to the complaint.

In one phone call, the complaint said, Fox said he wanted “200 men” to storm the Capitol building in Lansing to take hostages including Whitmer, and they would go on to try Whitmer for “treason.”

Members of the group met, discussed and trained in their tactics regarding how they’d attack the Capitol building, including using Molotov cocktails to destroy police vehicles, prosecutors said. They also tried constructing IEDs they could use in their attack, they said.

“Fox referred to Governor Whitmer as “this tyrant [expletive],” and stated, “I don’t know, boys, we gotta do something,” according to a live-streamed video preserved by the FBI. You guys link with me on our other location system, give me some ideas of what we can do.”

Their plans continuously evolved over the next several weeks, according to court documents. They men suggested it might be a better plan of action to kidnap Whitmer at her vacation home or shoot it up and kill her, authorities said.

The FBI says it first learned of the group’s plot in early 2020 and began embedding confidential sources and undercover agents to monitor their activities.

Throughout the COVID-19 pandemic, the Michigan State Capitol has been the scene of numerous protests by right wing activists – some armed and calling for Whitmer’s resignation due to the lockdown order she put in place.

During a meeting in June, the FBI says Croft and Fox and 13 others from different states gathered in Ohio to discuss violent overthrow of state governments they believed were violating the U.S. Constitution, including Michigan.

“Several members talked about murdering “tyrants” or “taking” a sitting governor,” the criminal complaint filed Thursday says. “The group decided they needed to increase their numbers and encouraged each other to talk to their neighbors and spread their message. As part of that recruitment effort, Fox reached out to a Michigan based militia group.”

On July 28, the complaint said, Fox posted to a private Facebook page, “We about to be busy ladies and gentlemen . . . This is where the Patriot shows up. Sacrifices his time, money, blood sweat and tears . . . it starts now so get [expletive] prepared!!”

In late August, Fox and a confidential source for the FBI allegedly conducted surveillance on Whitmer’s vacation home, taking photographs and slow-motion video from their vehicle as they drove by the residence, authorities said.

“During the surveillance operation, Fox said, “We ain’t gonna let ‘em burn our [expletive] state down. I don’t give a [expletive] if there’s only 20 or 30 of us, dude, we’ll go out there and use deadly force,” the complaint said.

Later on the weekend of Sep. 12-13, the group met for a training exercise at one of their properties and constructed an IED, then all drove to the vicinity of the vacation home and Croft at one point suggested moving forward with their operation that night, court documents said.

After that weekend, the FBI says the group began to finalize their plans to kidnap Whitmer and that they all set up a meeting yesterday to “make a payment on explosives and exchange tactical gear,” with the hopes of carrying out their attack before Election Day.

Southwest Airlines flights grounded due to ‘technical issues’
Harris invites all female US senators to have dinner at Naval Observatory
Senate confirms Ketanji Brown Jackson to 2nd highest court in US
Texas residents asked to conserve energy by ERCOT amid heat wave
Novavax COVID-19 vaccine: How it works and other things you should know
“There is no justification for my behavior” — Chrissy Teigen apologizes to her “targets” of cyberbullying