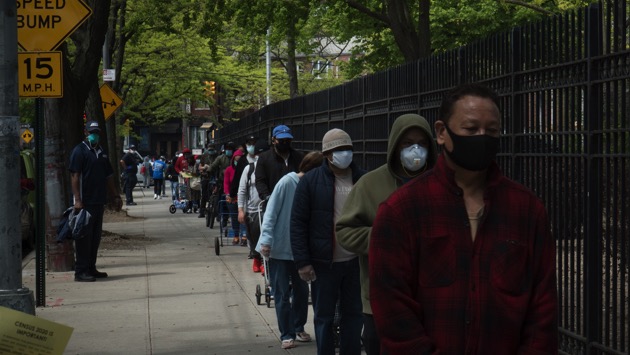 A crowd of people wait in line outside a food pantry in the New York City borough of Queens. - Massimo Giachetti/iStock
Posted on October 8, 2020 by ABC News

(NEW YORK) — The World Bank has warned that 150 million people could fall into “extreme poverty” by the end of 2021, due to the coronavirus pandemic and accompanying worldwide recession with the levels of poverty set to rise for the first time in 20 years.

In its biennial report on poverty and shared prosperity, the World Bank estimates between 9.1% and 9.4% of the global population would be affected by extreme poverty, which the multilateral development lender defines as living on under $1.90 a day. Had the pandemic not hit, the rate was forecast to fall to 7.9% this year.

“In order to reverse this serious setback to development progress and poverty reduction, countries will need to prepare for a different economy post-COVID, by allowing capital, labor, skills and innovation to move into new businesses and sectors,” World Bank president David Malpass said in a statement Wednesday.

While extreme poverty rates are on the rise, around a quarter of the world’s population live on less than $3.20 per day and more than 40% live on $5.50.

Overall, levels of extreme poverty have been steadily declining over the past quarter of a decade. Some 1.9 billion people lived in extreme poverty in 1990, compared to 689 million in 2017, according to the World Bank. In addition to the coronavirus pandemic, the report cites military conflict and climate change as two significant factors behind the recent reversal.

Extreme poverty is usually most keenly felt in rural areas, but that is now spreading to urban hubs. Around 82% of the number of people forecast to slide into extreme poverty will be living in middle-income countries, according to the report.