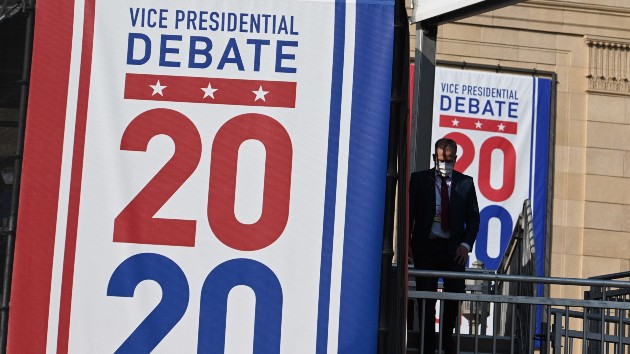 (SALT LAKE CITY) — With plexiglass and more than 12 feet of distance separating them, Vice President Mike Pence and Democratic nominee Sen. Kamala Harris of California will debate in Salt Lake City on Wednesday night in the first and only one-on-one matchup between the vice presidential candidates.

The showdown comes as President Donald Trump and several in his orbit have tested positive for the novel coronavirus, raising questions on a transfer of power to the vice president were Trump at 74 — or Democratic nominee Joe Biden at 77 — to become too ill to serve.

The 90-minute debate airs commercial-free from 9 to 10:30 p.m. ET on ABC and ABC News Live. Network coverage begins at 8 p.m. with a one-hour 20/20 special, “Pence vs. Harris: The Vice Presidential Debate.” ABC News Live will begin streaming coverage at 7 p.m. with ABC News’ political team providing context and analysis on both platforms following the debate.

The debate’s format will be divided into nine 10-minute sections with each candidate having two minutes to respond to the opening question in each segment and the remaining time allowed for follow ups. Moderator Susan Page, Washington Bureau chief of USA Today, has not released the topics. The sole vice presidential debate follows Trump and Biden’s chaotic debate last week in Cleveland.

It’s likely the coronavirus crisis will take center stage as Pence serves as head of the group tasked with containing the pandemic and Harris, a former prosecutor, has argued the case against the administration’s handling of COVID-19 in recent campaign appearances.

The University of Utah, the site of Wednesday’s debate, has stressed that fewer than 100 student attendees will be spaced out in the audience and that masks will be required.

In the days since President Donald Trump and former Vice President Joe Biden took the stage for their first presidential debate in Cleveland, Ohio, last week, the coronavirus has become even more of a central campaign issue than ever as the vice presidential candidates prepare for their only debate in Salt Lake City, Utah, Wednesday night.

The way the Trump administration has handled the pandemic is likely to be central to the debate as the White House deals with a cluster of COVID-19 cases, including the infection of Trump himself, amid a campaign and administration that have downplayed the virus and flouted the advice of health experts.

On Wednesday night, Trump’s stance on masks, his decision to restart large campaign rallies that pack thousands together with no opportunity to socially distance and his admission to Bob Woodward that he downplayed the severity of the coronavirus will likely be brought up, with the spate of White House coronavirus cases giving Harris new ammunition to claim the administration hasn’t taken the pandemic seriously enough.

Pence may also be asked to answer for Trump’s words, comparing COVID-19 to the flu as recently as Tuesday and previously saying the virus would just “disappear.”

Harris has previously said Trump has shown “a reckless disregard for the wellbeing of the American people” by failing to contain the outbreak and is likely to continue that line of attack.

“Even now, some eight months into this crisis, Donald Trump still won’t take responsibility. He still won’t act,” Harris said in a speech on Aug. 27.

Pence will likely defend Trump by saying he ordered the manufacturing of personal protective equipment (PPE), sent ventilators to states and shut down travel from China as evidence he sprung into action early on. He may use Trump’s short hospital stay as evidence of the progress made with regard to therapeutic drugs and to boost the president’s position that Americans shouldn’t let coronavirus “dominate” their lives.

In light of President Trump’s positive COVID-19 diagnosis and subsequent concerns from Harris’ team, the Commission on Presidential Debates agreed to add additional safety precautions to Wednesday’s debate at the University of Utah.

Unlike last week’s presidential debate, everyone in the audience will be required to wear a face mask or covering and those who don’t will be escorted out of the venue.

“They’ve got to wear a mask, and if they take their mask off they’re gonna be escorted out, and I don’t care who they are, they’ll be escorted out,” Frank Fahrenkopf, chairman of the Commission on Presidential Debates, told ABC News.

Harris and Pence will be tested prior to the debate, according to the commission, a change from the presidential debate when campaigns were responsible for testing their candidates and traveling parties.

And the candidates will be separated by more than just the issues — or at least one of them will be.

After Pence’s close proximity to others who have tested positive for COVID-19, the Harris campaign requested plexiglass barriers be used at the debate and the commission agreed — but the Pence campaign said Tuesday that they never agreed to a plexiglass partition.

A senior administration official in Pence’s office told ABC News Tuesday that the CPD decided to publicize the new safety protocols before any formal agreement was made and that the moderator and the Harris campaign can do as they want, “but we do not.”

The official said Centers for Disease Control and Prevention guidelines recommend plexiglass whenever 6 feet of separation isn’t possible, but noted the candidates will be 12-feet apart on stage. The comment fell in line with Pence’s chief of staff Marc Short who told The Washington Post Tuesday that plexiglass is “not needed.”

Pence’s communications director, Katie Miller, who tested positive for COVID-19 in May, also responded to the request in a statement to Axios earlier this week saying, “If Sen. Harris wants to use a fortress around herself, have at it.”

Following news that Miller’s husband, senior Trump aide Stephen Miller, tested positive for the coronavirus, she reportedly left Utah and a spokesperson declined to comment if Pence would agree to plexiglass.