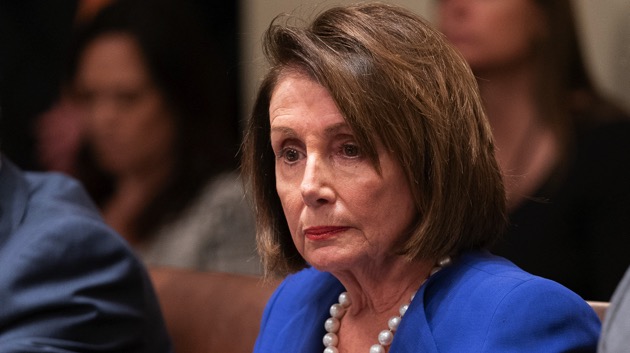 (NEW YORK) — House Speaker Nancy Pelosi said Wednesday that President Donald Trump is rebounding from the “terrible mistake” of calling off negotiations on a stimulus package to address the coronavirus pandemic.

In a pair of late-night tweets, Trump changed course on negotiating coronavirus relief that he had earlier announced he was calling off until after the election.

“It’s hard to see any clear sane path on what he’s doing but the fact is, he saw the political downside of his statement of walking away from the negotiations …he’s rebounding from a terrible mistake he made yesterday and the Republicans in Congress are going down the drain with him on that,” she said on ABC’s The View.

“But I will say this, it is really important for us to come to this agreement. When the president just popped off and made that announcement without even informing us that that was the case, he insulted the Constitution of the United States,” she said.

Pelosi also called the White House the most dangerous place in the country after the latest coronavirus outbreak has hit several of Trump’s closest advisers.

“I don’t want to go anywhere near the White House. It’s one of the most dangerous places in the country,” Pelosi said.

Pelosi repeated her suggestion made privately Tuesday that Trump’s medications might be affecting his thinking.

“I said yesterday to my colleagues, I said there are those who say that the steroids had an impact on people’s thinking, I don’t know, but there are those health care providers who say that,” Pelosi said. “Also, if you have the coronavirus, it has an impact, as well. So the combination is something that should be viewed.”

“I think it’s true to form. I think that the president has always had erratic behavior. Right now it’s very, very dangerous, because he knows the danger of the virus, but he’s in denial, as he was right from the start. Denial, delay, distortion,” Pelosi said.

“But again, there are enablers around the president, who really should know better, who should really know better,” Pelosi added.

She also called for the president’s advisers to stage an intervention.

Pelosi and Treasury Secretary Steven Mnuchin spoke on the phone Wednesday morning about aid for the ailing airline industry just one day after Trump instructed his team to stop negotiations on a stimulus package with Democrats.

The House attempted to pass a bill last week that would extend the Payroll Support Program for airline workers via unanimous consent, but Republicans blocked that bill because it came to the floor unannounced and with a lack of agreement among Republican leadership.

Major U.S. airlines furloughed over 30,000 employees last week following the expiration of relief provided by the CARES Act. American Airlines and United Airlines signaled they would reinstate employees if lawmakers came to an agreement on a second round of aid.

“Speaker Pelosi and Secretary Mnuchin spoke by phone at 9:33 a.m. The Secretary inquired about a standalone airlines bill. The Speaker reminded him that Republicans blocked that bill on Friday & asked him to review the DeFazio bill so that they could have an informed conversation,” a spokesman to Pelosi tweeted Wednesday.

“Again and again, Democrats offer legislation to save lives and livelihoods,” Pelosi said in a statement last week, “only to be met by more Republican obstruction. Either Republicans are not serious about meeting the staggering health and economic challenge facing our nation, or they do not care.”

It’s unclear at this point if the House can pass that bill as it stands.

Pelosi and Mnuchin were negotiating in recent days and indicated several times that they were close to reaching a deal. They met at her office at the Capitol for 90 minutes last week, followed by a series of phone calls later in the week. Pelosi and Mnuchin traded papers on Monday but key differences still remained on liability insurance and funding for local and state governments, according to a source familiar with the talks.

Democrats have pushed for a $2.2 trillion bill, while Mnuchin countered with $1.6 trillion.

Pelosi and Mnuchin spoke again by phone Tuesday afternoon just after the president called off negotiations. Mnuchin, according to Pelosi’s office, confirmed that talks were off.

In a statement released Tuesday, Pelosi blasted the White House as being in “complete disarray.”

“Clearly, the White House is in complete disarray. Sadly, they are rejecting the urgent warnings of Fed Chairman Powell today, that ‘Too little support would lead to a weak recovery, creating unnecessary hardship for households and businesses. Over time, household insolvencies and business bankruptcies would rise, harming the productive capacity of the economy and holding back wage growth. By contrast, the risks of overdoing it seem, for now, to be smaller. Even if policy actions ultimately prove to be greater than needed, they will not go to waste,” she said.