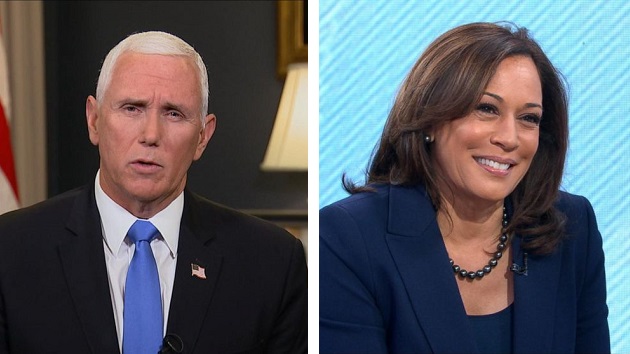 No surprise that Vice President Mike Pence and vice presidential nominee Sen. Kamala Harris, D-Calif., couldn’t be further apart on where they stand on some of the biggest issues.

When President Donald Trump selected then-Gov. Pence in 2016, it helped secure the evangelical Christian vote and brought much needed government experience to balance the ticket that was lacking for the businessman candidate. Pence supports cutting taxes across the board, less regulations and is a long-time advocate for banning abortion.

Throughout his first term as vice president, Pence has never broken from Trump on any issue and defended him even on his most controversial statements or actions.

Harris’ historic pick as the first woman of color on either party’s presidential ticket brought excitement to former Vice President Joe Biden’s campaign, which had previously been described as lacking enthusiasm — especially among younger voters. During the month of Harris’ selection, the campaign and Democratic Party brought in a record $364.5 million in fundraising.

She has evolved on some issues during her career in local, state and federal government. That experience includes her prosecutorial career, role as California Attorney general, U.S. Senate tenure, her ill-fated presidential bid and newly minted status as the Democratic vice presidential nominee, which comes after a primary where she delivered some of the sharpest attacks on Biden’s policies, such as his position on busing and working with segregationist senators.

In February, Trump announced that Pence would lead the federal government’s response to the COVID-19 pandemic, the biggest crisis he’s ever managed in his political career. Pence held numerous White House Coronavirus Task Force briefings at the height of the pandemic and oversaw the deployment of personal protective equipment and ventilators to states facing an overwhelming number of patients.

Pence repeatedly downplayed the severity of the virus, both with his actions and public statements. He once said that the pandemic would largely be behind the nation by Memorial Day and in April, Pence disregarded a Mayo Clinic policy and did not wear a mask while visiting patients in Minnesota, even after his office was informed about the policy there.

Since that visit, Pence and his staff have been more consistent in wearing a mask in public, but he has occasionally walked a rope line after campaign events without one, signing autographs, but staying a few feet back.

Harris has continuously condemned Trump’s handling of the COVID-19 pandemic and repeatedly called for leaders to “listen to the scientists and the experts,” on how to proceed. In August, when she and Biden sat down with ABC’s World News Tonight anchor David Muir and Good Morning America co-anchor Robin Roberts, Harris said their approach will be guided by public health experts “unlike what we have seen now which are the politics guiding a public health crisis.”

Harris has called for what she describes as a national “standard” for wearing masks. And on a possible vaccine for the coronavirus, Harris said she wouldn’t solely believe Trump on its efficacy. She said she’d want to hear information from credible sources before believing it’s safe.

“I will not take his word for it,” Harris said on CNN. “He wants us to ingest bleach.”

Pence has stood by and pushed the Trump campaign message of “law and order” and has remained a vigorous defender of police. In an interview with ABC News Live Anchor Linsey Davis, Pence said that he and Trump “reject the notion from Joe Biden and others that there’s an ‘implicit bias’ towards minorities in law enforcement.”

“The president and I know we don’t have to choose between supporting law enforcement and supporting all of the families that live in our major cities,” Pence told a crowd of supporters in Lititz, Pennsylvania. “We have done both for the last three and a half years, and we’re going to support law enforcement and support our African American and minority families for four more years in the White House.”

The vice president has dismissed the “defund the police” movement and has called for more resources and better training and accountability in law enforcement.

During an appearance on ABC’s The View in June, Harris was asked by co-host Meghan McCain if she supports the “Defund the Police” slogan, but did not give a direct answer on where she stands.

“We need to re-imagine how we are achieving public safety in America. And to have cities where one-third of their entire budget is going to policing but yet there’s a dire need in those same cities for mental health resources, for resources going into public schools, for resources going into job training and job creation. Come on. We have to be honest about this that there isn’t a consensus around this because if there were, we would actually see a smarter distribution of resources in our country to address the issues that need to be addressed,” Harris said.

After the shooting by police of Jacob Blake, Harris met with Blake’s family in Wisconsin and spoke with Blake over the phone. She also told NBC News, “I think that there should be a thorough investigation, and based on what I’ve seen, it seems that the officer should be charged.” She’s also kept in contact with Tamika Palmer, the mother of Breonna Taylor who was shot by Louisville, Kentucky, police while she was sleeping in her home.

Harris has called for economic and educational investment in communities of color to create safer, healthier communities. She and Biden have called for an end to no-knock warrants, chokeholds and carotid holds. They want to create a national excessive force standard and create a database to track cops who use excessive force and break the rules. The pair want to end cash bail and private prisons.

“We have to understand that you can’t think that the only way to create safe communities is to put more police on the streets, that’s not how it’s going to work,” Harris told pop star Lizzo on an Instagram Live stream in September.

In contrast, Harris wrote in her 2009 book Smart on Crime, “if we take a show of hands of those who would like to see more police officers on the street, mine would shoot up.”

Harris was once a proponent of the Green New Deal as both a co-sponsor of Sen. Bernie Sanders’ bill and as a presidential candidate.

Since becoming Biden’s running mate, Harris has moved away from her support, instead, embracing Biden’s climate plan, which calls for the U.S. to rejoin the Paris Climate agreement, aims for the U.S. to get to net-zero carbon emissions by 2050 and invests $2 trillion in clean energy and infrastructure.

Fracking contributes to the economy in Pence’s home state of Indiana and he’s an advocate for the fossil fuel industry. He once called global warming a “myth,” but has evolved slightly to say “there’s no question” human activity has “some impact on climate change.” He touts the economic sectors of oil, gas, fracking and coal as areas that boost job creation and the overall economy. He also hailed Trump for removing the U.S. from the Paris Climate Agreement, which he has called a “bad deal since the moment it was signed” by the Obama administration in 2015.

Pence also misleadingly told a group of farmers and ranchers in Iowa that he was not going to let Harris reduce the amount of red meat Americans should eat, referencing a comment she made during a 2019 CNN town hall as a way to curb the impact of climate change.

“Sen. Kamala Harris said she would change the dietary guidelines of this country to reduce the amount of red meat Americans can eat. Well, I’ve got some red meat for you. We’re not gonna let Joe Biden and Kamala Harris cut America’s meat,” he said.

Changing health guidelines does not necessarily mean Americans will be required to implement them, they are only recommendations.

During the 2019 town hall, Harris was asked if she “would support changing the dietary guidelines” in the U.S. to reduce red meat consumption and she answered, “yes.” She said, “I love cheeseburgers from time to time,” but that there needs to be more education surrounding “the effect of our eating habits on our environment.”

Absent from Pence’s speeches at campaign events is how he envisions providing health care for Americans. The Trump/Pence campaign in 2016 ran on a “repeal and replace” position of Obamacare and have repeatedly gone through the court system to try to dismantle the Affordable Care Act during their first-term. They have yet to put out a replacement plan since taking office.

Like Trump, Pence has also expressed the need to protect Americans with preexisting conditions, even though the Trump Administration is currently asking the U.S. Supreme Court to strike down Obamacare in its entirety, which already protects those vulnerable Americans.

As recently as September, during a town hall moderated by ABC News Chief Anchor George Stephanopoulos, Trump was pressed about his repeated claims to deliver a health care plan without following through. Trump said, “I have it already, and it’s a much better plan,” but he has not delivered.

On Sept. 24, Trump did sign several executive orders, framing them as his “America First Health Care Plan,” which are not legislative proposals, but rather administrative actions. He claimed his new plans cost 60% less than options under Obamacare, an end to surprise billing and protections for Americans with preexisting conditions, which is already covered under the ACA.

Harris was initially a supporter of “Medicare for All” and backer of Sanders’ plan which would get rid of private health insurance. During the presidential primary, Harris changed her position, instead calling for an expansion of health care access while still allowing for private health insurance. Harris, in an interview with Axios in October 2019, acknowledged that she’d been “called a flip-flopper for that.”

As the Democratic vice presidential nominee, Harris has backed Biden’s health plan which would provide a public option for Americans seeking health care and aim to lower costs.

The vice president has also been a steadfast gun-rights advocate and a supporter of the National Rifle Association (NRA), with a record that shows him opposing restrictions on the Second Amendment.

In 2010, Pence said “Congress should rebuff attempts to restrict the Second Amendment and recognize that programs such as national firearms registration and the assault weapons ban are antithetical to the constitutional rights of law-abiding Americans.” Most recently, when Pence spoke at the National Rifle Association Leadership Forum in 2019, he told them “under this president and this administration, the right to keep and bear arms shall not be infringed.”

During her presidential campaign, Harris has proposed executive actions to counter gun violence including banning assault weapons and near-universal background checks administered by people who sell over five guns a year. Gun manufacturers and dealers who fail to comply would have their licenses revoked. As the vice presidential nominee, she has called for the renewal of the assault weapons ban and also called for the elimination of the “boyfriend loophole” in addition to her avid support of universal background checks.

Harris told reporters in April 2019 that she owned a gun for “personal safety,” but says it’s a “false choice… to suggest you’re either in favor of the Second Amendment or you want to take everyone’s guns away.”

Bill that could help Black farmers reclaim millions of acres ‘a step in the right direction’
Vanderbilt’s Sarah Fuller becomes the first woman to play in a Power 5 conference football game
Heavy rain ongoing on Gulf Coast as storm aims for Northeast next week
Denver Broncos the latest NFL team hampered by coronavirus
New storm system to travel across the South this weekend
Black Friday 2020: Tips on the best deals to look out for