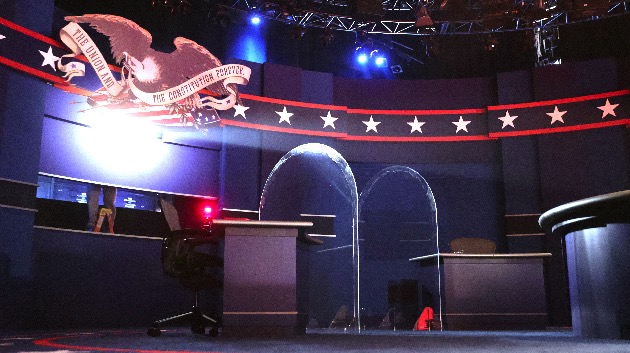 (WASHINGTON) — As the vice presidential debate was set to get underway in a matter of hours Wednesday night, former Vice President Joe Biden and his campaign have drawn a line in the sand when it comes to the next debate with President Donald Trump following his bout with COVID-19.

“Well, I think if he still has COVID, we shouldn’t have a debate,” Biden told reporters Tuesday night.

“I’m not sure what President Trump is all about now, I don’t know what his status is. I’m looking forward to being able to debate him. But I just hope all the protocols are followed, what’s necessary at the time,” Biden said.

Questions about the viability of holding debate, scheduled to take place Oct. 15 in Miami have swirled following Trump’s announcement early last Friday morning — a little more than two days after he faced off against Biden in their first chaotic presidential debate — that he had tested positive for the virus.

Biden has been tested four times since his meeting with Trump on the debate stage, his campaign said, with all four tests coming back negative.

In an interview Wednesday on ABC’s Good Morning America, Biden’s deputy campaign manager, Kate Bedingfield, doubled down on Biden’s comments, saying the onus is on Trump to prove he poses no threat to Biden — or attendees at the town hall-style debate.

“It is a town hall format. There will be real people. There will be citizens there in attendance asking questions. So, the obligation is on Donald Trump to prove that he is not contagious. The obligation is on him to meet the standards laid out by the Cleveland Clinic, laid out by the presidential commission on debates. And we have every expectation that he’ll do that. And when he does, we’re looking forward to being there to debate,” Bedingfield said.

President Trump spent most of four days in the hospital receiving care after experiencing serious symptoms.

While quarantining at the White House due to his diagnosis, Trump tweeted he intends to still debate next Thursday.

“I am looking forward to the debate on the evening of Thursday, October 15th in Miami. It will be great!” Trump tweeted Tuesday morning.

I am looking forward to the debate on the evening of Thursday, October 15th in Miami. It will be great!

While it’s unclear if the debate will continue as scheduled, or require safety modifications for participants, the president’s coronavirus diagnosis set off a series of alarm bells when it comes to the showdowns — especially given the proximity of his diagnosis to the first debate and questions about when he and his entourage had been last tested.

Wednesday’s vice presidential debate setup will keep the candidates more than 12 feet apart on stage, and feature plexiglass partitions separating the two. As was the case for Trump and Biden’s first debate, Sen. Kamala Harris and Vice President Mike Pence will not shake hands or wear masks on stage.

Biden predicted Tuesday that additional measures will also be needed for his next meeting with Trump.

“I think we’re gonna have to follow very strict guidelines. Too many people have been infected. And it’s a very serious problem. And so I’ll be guided by the guidelines of the Cleveland Clinic, and what the docs say is the right thing to do. If and when he shows up for debate.”