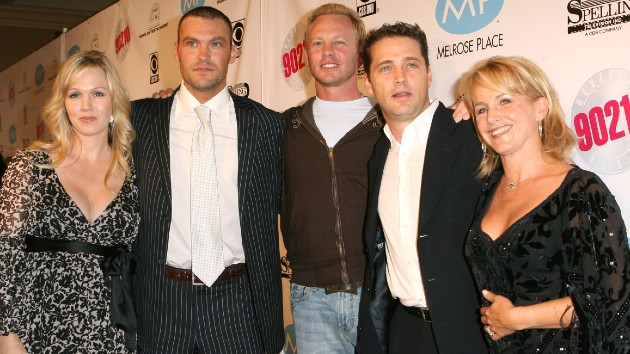 (LOS ANGELES) — Jessica Alba has caused quite a stir among the Beverly Hills, 90210 cast.

The actress recently dropped the bombshell that she was instructed not to make eye contact with the cast while acting as a guest star on the show back in the day and now cast members Jennie Garth, Tori Spelling, Jason Priestley and Ian Ziering are sharing their side of the story.

While speaking with Access Hollywood, Ziering said, “for the life of me ever imagine a situation where any of the actors would ever say that… none of my cast mates ever requested anything like that.” However, he did acknowledge that the order could have come from an assistant director or someone outside of the cast.

Priestley had a similar reaction during an interview.

“Don’t look at the stars of the show was never an edict that came down on our show,” he claimed. “I don’t know who told Jessica Alba not to look at us.”

Garth and Spelling also addressed the allegation on their podcast 9021OMG.

“I’m not going to lie to you guys: I was a little horrified when I saw that clip that she said that she wasn’t allowed to make eye contact and she had an awful experience because her baby wipes are my favorite,” Spelling said, referencing the product made by Alba’s business, The Honest Company.

As for Garth, she didn’t rule out that it could have been her.

“If anybody was, you know, didn’t want to have their eyes looked into, it would have been me,” she said. “But, I don’t remember because I have the world’s worst memory.”