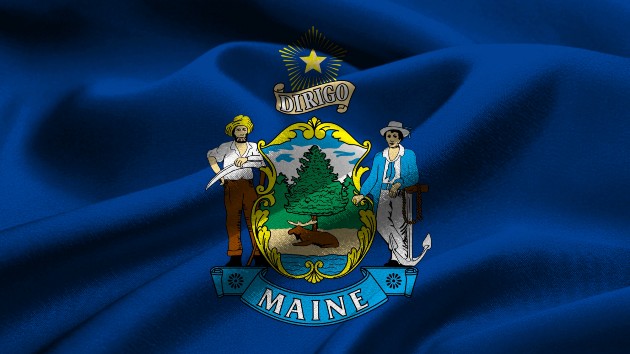 (WASHINGTON) — Even before a victor is declared for this year’s elections, Maine will be making history.

The state will be the first in the union to decide the presidential and congressional elections through a ranked-choice voting ballot. Unlike a traditional winner-take-all plurality ballot, ranked choice voters are asked to list their candidates in order of preference and the victor is decided through a process of elimination based on those rankings.

Maine voters have become familiar with the process since they approved in a ballot measure in 2016 and used it in subsequent elections, according to Dan Shea, the chair of the department of government at Colby College.

“We’re starting to get comfortable with it,” he told ABC News. “There are still some who are confused but they have seen it in action and getting comfortable.”

Experts say this year’s use of ranked-choice voting in Maine will be a test run for future elections as two states are considering ballot measures to switch to the method.

Under a ranked-choice voting ballot, voters rank their candidates based on their preferences. Voters can choose only one candidate and leave the other rankings blank if they wish.

If a candidate gets the majority of the first choices from voters, in Maine’s case over 50%, that candidate is declared the winner.

If no one candidate gets a majority, the results will then head into what is known as an instant runoff.

Election officials will look at the ballots and eliminate the candidate who received the fewest number of first choice rankings. The ballots that listed the eliminated candidate as the top choice are then re-examined.

The candidates that were ranked No. 2 on those ballots are tallied, and those votes are transferred to the remaining candidates.

If there is a candidate with a majority after the transfer, that person is the winner. If not, the process continues to more rounds until there is a clear majority.

More than 3.3 million voters in Maine and 17 cities, including Minneapolis and San Francisco, vote through ranked-choice voting, according to the nonprofit advocacy group Ranked Choice Voting Resource Center.

Christopher Hughes, the policy director for the Ranked Choice Voting Resource Center, told ABC News that the system has grown in popularity over the years, because it gives voters more choice and say in their elected officials.

Hughes said voters who prefer third party candidates can still have their voices heard even if their candidate is eliminated in a ranked choice voting round.

“You don’t have that excuse anymore that your vote doesn’t count,” he said.

Shea said there was an initial learning curve among Maine voters after it rolled out and that led to a heated debate and legal battle from opponents who argued that it didn’t accurately represent the electorate.

“Not unlike a lot of issues in the world, the partisan divisions have been strong with this,” he said.

In 2016, Maine voters passed a ballot measure that changed its state elections to ranked-choice voting.

The ballot measure stemmed from Republican Paul LePage’s back-to-back victories in 2010 and 2014 for the state’s governor seat where he won with less than 50% of the vote due to third party candidates splitting the difference, according to experts.

Several groups, including the Maine Republican party, contended ranked-choice voting was unconstitutional and challenged the change over the last four years with civil suits and complaints. The Maine Supreme Judicial Court rejected those complaints just before the June 2018 primaries.

It was in that same election where voters passed a ballot measure to extend ranked-choice voting to federal races.

“People have seen what happens when you use ranked-choice voting and the world doesn’t fall out from under you,” Hughes said.

Representatives from the Maine GOP did not immediately return questions for comment for the story.

David Kimball, a professor of political science The University of Missouri at St. Louis, who is currently studying the use of ranked-choice voting, said arguments made by elected officials that the system favors one party over the other don’t add up.

Based on research into the method, ranked-choice voting has prompted candidates to have less negative campaign strategies, he said.

Kimball cited the 2018 congressional race for Maine’s second district, which featured four candidates, as an example.

In the first round of voting, incumbent Republican Bruce Poliquin led his opponent, Democrat Jared Golden, with over 2,000 votes, accord to election results.

More than 8,000 ballots from those voters who chose the eliminated candidates didn’t list a second preference and were discarded in the second round of the runoff, according to the election results.

“If you want to win a ranked choice voter election you have a strong incentive to reach out to voters who prefer other candidates, because you want to be their second choice,” Kimball told ABC News.

How Maine will conduct the 2020 election

Kristen Muszynski, a spokeswoman for the Maine Department of the Secretary of State, told ABC News that despite the legal limbo leading into the election, the state has been educating the public about the rules and will have posters at polling places to ensure that everyone is informed before they cast their ballot.

The secretary of state’s website also has a website that provides voters with instructions, a printable ballot and a video to help them understand how to cast their votes, according to Muszynski. She added that her office has been using social media to promote the ranked-choice voting system and has been answering any comments left by users on their pages.

Muszynski said election officials will keep an eye on the early tallies reported by election districts, some of which use electronic tabulation machines while others use hand counting, and will decide whether to go into the elimination rounds.

In that scenario, the ballots and tabulating memory devices will be transported to a secure site in Augusta and fed into a computer system that will conduct the elimination rounds until they reach a majority.

“That process usually takes us about a week to a week-and-a-half,” Muszynski told ABC News.

The spokeswoman said most voters are prepared for the potential wait for official results.

“We have quite a bit of experience doing ranked-choice,” she said. “Maine voters are very experienced about going about it.”

The future of ranked-choice voting

Outside of Maine, ranked-choice voting will have a presence in two state ballots on Election Day: Alaska and Massachusetts.

A ballot measure in Alaska would change that state’s federal and state elections to ranked-choice while Massachusetts’ measure would put the voting system for state races.

Hughes said both states have seen several primaries and main elections where multiple candidates have split the vote and resulted in victors with slim majorities.

“It will be interested to see how these campaigns play out,” he said.

Hughes and other experts predict there will be more campaigns by electorates to consider switching to a ranked choice system, especially as more places adopt them.

Next year, New York City, which has over 6.5 million people over 18, will become the largest electoral jurisdiction to use ranked-choice voting for its local primaries and elections.

Kimball said voters who are confused or have questions about ranked choice will have a clearer idea of the method and decide if the method is right for them.

“I think there is a general appetite for reform broadly speaking,” he said. “I don’t think ranked-choice voting is the only solution…but it seems to have a couple of features that appeal to some people. I think the evidence that encourages people to be more collaborative, that appeals to some folks.”

Suspect arrested, charged with murder for Sonic Drive-In shooting that killed two, injured two
How one university system plans to send home thousands of students for Thanksgiving break
Hilary Duff reveals she is isolating from family due to COVID-19 exposure
Amid politics and pandemic keeping families apart, how to keep peace at Thanksgiving
Why millions don’t trust the election results, despite no evidence of widespread fraud: Experts
AstraZeneca, Oxford say their vaccine is up to 90% effective