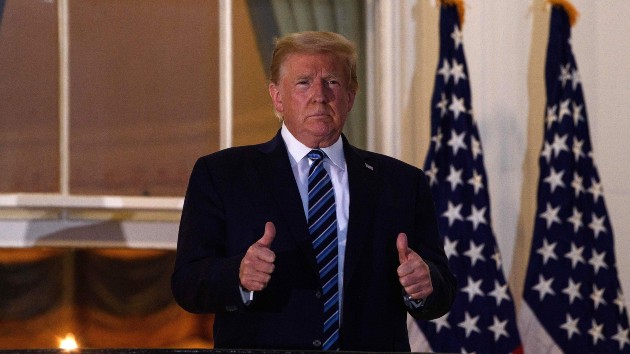 (WASHINGTON) — President Donald Trump’s condition is continuing to improve as he fights a coronavirus infection, doctors said, and he left Walter Reed Medical Center on Monday evening, landing at the White House shortly before 7 p.m.

Marine One landed on the White House South Lawn at 6:53 p.m. Trump, again, did not stop and talk to reporters but made a dramatic return without speaking a word.

He, instead, walked up the steps of White House, faced the cameras and took off his mask — in an apparent effort to project strength and flout public health protocols as he continues to battle COVID-19. Trump also gave a thumbs up and an extended salute to Marine One, before walking inside the residence.

The president is returning to a White House plagued by COVID-19 as 18 people in Trump’s orbit have reported testing positive since last week.

Meanwhile, numerous questions remain about how many more people at the highest levels of government had been exposed to the virus after a week of events involving the president where social distancing and mask-wearing were lax in the White House and elsewhere.

Here is how the news is developing Tuesday. All times Eastern:

The Trump campaign is already fundraising off of President Trump’s exit from Walter Reed Medical Center Monday night, urging supporters not to be, “afraid of Covid,” which has killed over 200,000 Americans.

The subject of a fundraising email sent Monday night said: “I’M BACK” — even though his doctors said earlier in the day that he’s not out of the woods yet.

The email goes on to argue “under the Trump Administration, we have developed some really great drugs and knowledge,” but since testing positive the president has received some of the best treatment in the world — which most Americans don’t have access to.

“This is it…I need you to step up to the front lines during this critical time,” the email urges supporters.