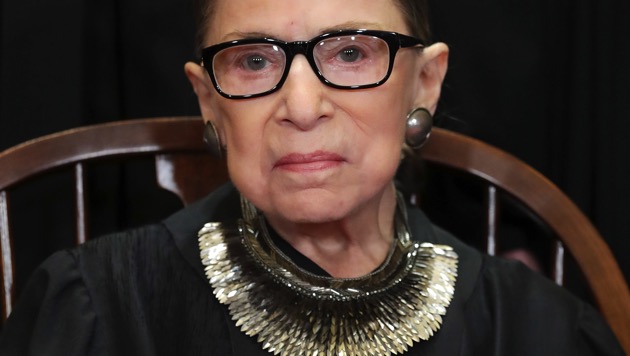 (NEW YORK) — Banana Republic made a tribute to Ruth Bader Ginsburg by re-releasing her iconic “dissent collar” necklace two weeks after her death at age 87 due to complications from metastic pancreatic cancer.

The fashion retailer announced Friday that the famous collar would be available for a limited time and renamed the “notorious necklace.”

The famous accessory was originally gifted to the former Supreme Court justice at Glamour magazine’s 2012 “Women of the Year” gala.

She wore it and several others on various occasions as collars became part of her statement look.

Banana Republic’s notorious necklace sold out almost immediately, but the company is working hard to restock as quickly as possible according to the company’s website.

“The Notorious Necklace is officially sold out,” Banana Republic wrote in a post. “Thank you all for the overwhelming love and positive support.”

“Please add more!! I have been checking constantly!!! (Missed today, dang it!),” @besty_davies wrote in a comment. Banana Republic advised in a reply that customers can preorder. However, the item is on backorder for many.

Banana Republic has also pledged to donate 100% of proceeds to the International Center For Research on Women which is a global research institute whose mission is to empower women, advance gender equality and fight poverty.

“This is my dissenting collar,” Ginsburg told Yahoo in 2014 about her iconic Banana Republic piece. “It looks fitting for dissent.”

In 2019, the clothing company previously re-released the dissent collar necklace and said the response to it selling out in a few hours was “tremendous” and “heartwarming.”

Netflix pulls the plug on ‘Chappelle’s Show’ at Dave Chappelle’s request
Amber Riley is engaged: “I’m looking at a man who changed my mind” about “love”
Children at higher risk of household poisonings amid coronavirus pandemic, experts warn
Boy, 11, arrested after multiple fires set at neighborhood home with people inside
ICU nurse issues warning on Facebook as her dad is treated for COVID-19 on her floor
‘The Queen’s Gambit’ is a winning one for Netflix