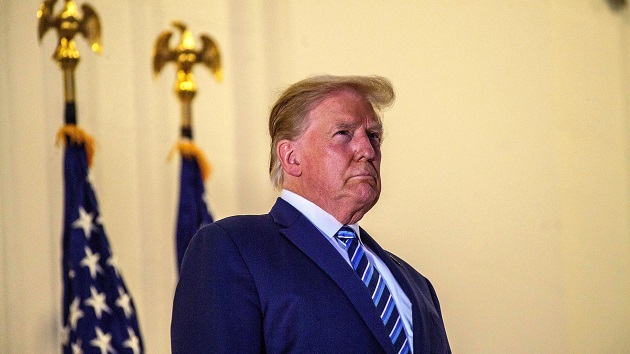 (WASHINGTON) — What exactly did President Donald Trump mean when he said Monday, after spending three nights in the hospital dealing with a severe case of COVID-19: “I knew there’s danger to it — but I had to do it.”

In a video Trump tweeted soon after returning to the White House Monday evening, he spoke directly to the camera — still without the mask he had just dramatically taken off — and seemed to argue his getting sick was a necessary risk to show he was a strong leader.

“As your leader, I had to do that,” said Trump, flanked by American flags atop the South Portico with the Washington Monument in the distance behind him.

“I knew there’s danger to it — but I had to do it. I stood out front. I led. Nobody that’s a leader would not do what I did. And I know there’s a risk, there’s a danger — but that’s okay,” he said.

Trump’s language seemed to suggest his contracting COVID-19 — a disease that has now killed more than 210,000 Americans — was an act of political courage to help him lead the fight against the virus, not the result of his continued refusal to always wear a mask and social distance throughout the pandemic.

Instead, seeking to project a triumphant image, he repeatedly told American instead not to let COVID-19 “dominate” them. He sent a tweet with the same message — “Don’t be afraid of Covid — announcing his departure from Walter Reed National Military Medical Center on Monday.

At least twice since announcing his COVID-19 diagnosis Friday morning, he has required supplemental oxygen — at the White House Friday and at Walter Reed Saturday — after dangerous drops in his blood oxygen level.

Trump did not acknowledge that he has experienced unparalleled medical care few other Americans receive and that the antiviral cocktail he’s being treated with has only been issued to fewer than ten people outside of a clinical trial setting.

The science on whether recovering from COVID-19 confers immunity has not yet been established, according to the Centers for Disease Control and Prevention.

Trump previewed his new political strategy — that contracting COVID-19 was the best way for him to learn about it — in another video he tweeted from Walter Reed Sunday, just before he briefly left the hospital in the presidential motorcade to wave to supporters despite still being contagious.

But nearly 3 out of every 4 Americans say Trump took failed to take steps necessary to avoid contracting the virus, according to an ABC News/Ipsos poll released Sunday which was conducted on Friday and Saturday, following Trump’s positive test early Friday morning.

In two separate questions, an identical 72% said that Trump did not take the “risk of contracting the virus seriously enough,” nor “the appropriate precautions when it came to his personal health.”