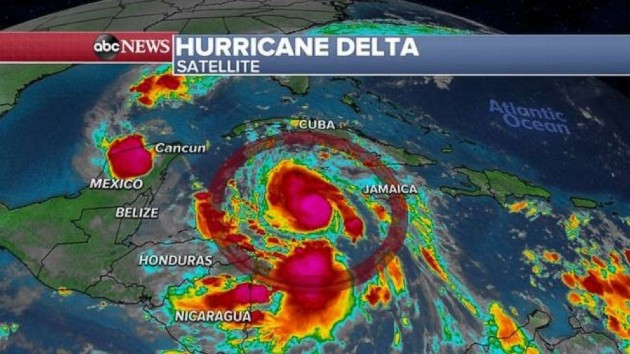 Delta rapidly strengthened to a Category 3 storm, and then a Category 4, Tuesday morning, becoming the third major hurricane of the 2020 Atlantic season.

Delta is forecast to stay at a Category 4 hurricane when it slams into Cancun Tuesday night into early Wednesday morning.

Landfall in Cancun is forecast for around 4 a.m. Delta is expected to bring dangerous winds, flash flooding and storm surge to the Yucatán Peninsula.

Delta will not lose much strength after making landfall in Mexico. The hurricane is forecast to re-strengthen to a Category 4 hurricane in the middle of the Gulf of Mexico on Thursday afternoon.

It is not yet clear how much Delta will weaken before it hits the Louisiana coast on Friday night.

The National Hurricane Center is forecasting Delta to be a Category 2 or higher hurricane when it makes landfall in Louisiana.

Delta is expected to bring damaging winds to the Gulf Coast. Flooding rain — as high as 6 to 12 inches — could hit parts of Louisiana and Mississippi.

Delta is the ninth hurricane in the Atlantic so far this season, tying for the most in a single season. In only three other years in recorded history – 1995, 2004 and 2005 — have we had this many hurricanes this early in the season.

If Delta makes landfall in the U.S., it would be the tenth named storm to make landfall in one season, which has never happened before in recorded history.