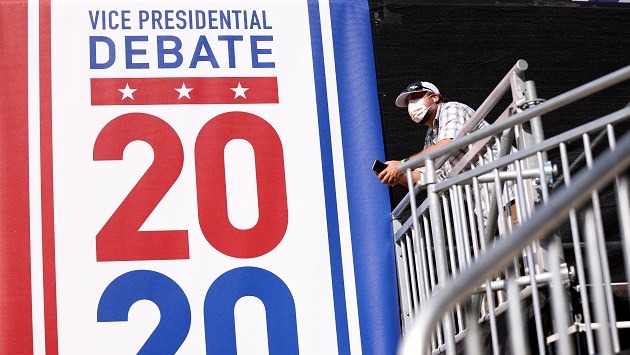 (SALT LAKE CITY) — In the days since President Donald Trump and former Vice President Joe Biden took the stage for their first presidential debate in Cleveland, Ohio, last week, the coronavirus has become even more of a central campaign issue than ever as the vice presidential candidates prepare for their only debate in Salt Lake City, Utah, Wednesday night.

Not only are some of the debate’s safety measures a matter of contention between the two camps, but the way the Trump administration has handled the pandemic is also likely to be central to the debate as the White House deals with a cluster of COVID-19 cases, including the infection of Trump himslef, amid a campaign and administration that have downplayed the virus and flouted the advice of health experts.

In response to COVID-19 concerns from Kamala Harris’ team, the Commission on Presidential debates has agreed to add additional safety precautions at the debate.

Vice President Mike Pence and Harris will be seated 12-feet and 3-inches away from each other and from the debate moderator, USA Today Washington Bureau Chief Susan Page. As was the case at the presidential debate, there will be no handshakes between the candidates, and while the Commission said there would also be plexiglass separating Harris, Pence and Page, the Pence campaign has objected to using it.

A senior administration official in Pence’s office told ABC News Tuesday that there had been no formal agreement about the plexiglass and that while Harris and Page could use it, Pence doesn’t want to.

In a statement to ABC News, Pence spokeswoman Katie Miller said, “If Sen. Harris wants to use a fortress around herself, have at it.”

Though Harris, Pence and Page will not wear masks on stage, everyone else in the debate hall will be required to wear one. Anyone who takes their mask off will be escorted out, according to the rules.

During the presidential debate in Cleveland, members of the Trump family were seen sitting in the audience without masks, even after being asked to put them on.

Harris and Pence will be tested prior to the debate, according to the Commission, which is a change from the presidential debate when the campaigns were responsible for testing their candidates and traveling parties.

“They’ve got to wear a mask, and if they take their mask off they’re gonna be escorted out, and I don’t care who they are, they’ll be escorted out,” said Frank Fahrenkopf, chairman of the Commission on Presidential Debates, in an interview with ABC News.

The vice president has tested negative each day since Friday, and his White House physician has cleared him from having to quarantine, citing that he is not a “close contact” with anyone who’s tested positive, including Trump.

But Pence was present at the Rose Garden ceremony on Sept. 26 when Trump announced Judge Amy Coney Barrett as his U.S. Supreme Court nominee. Eleven of the attendees have since tested positive for COVID-19. He was also in the Oval Office with Trump the morning of his debate, just days before the president tested positive.

Harris tested negative for COVID-19 Monday after being screened in Salt Lake City, where she has been gearing up for the debate, according to an aide.

On Wednesday night, Trump’s stance on masks, his decision to restart large campaign rallies that pack thousands together with no opportunity to socially distance and his admission to Bob Woodward that he downplayed the severity of the coronavirus will likely be brought up, with the spate of White House coronavirus cases giving Harris new ammunition to claim the administration hasn’t taken the pandemic seriously enough.

Pence may also be asked to answer for Trump’s words, comparing COVID-19 to the flu as recently as Tuesdsay and previously saying the virus would just “disappear.”

Harris has previously said Trump has shown “a reckless disregard for the wellbeing of the American people” by failing to contain the outbreak and is likely to continue that line of attack.

“Even now, some eight months into this crisis, Donald Trump still won’t take responsibility. He still won’t act,” Harris said in a speech on Aug. 27.

Pence will likely defend Trump by saying he ordered the manufacturing of personal protective equipment (PPE), sent ventilators to states and shut down travel from China as evidence he sprung into action early on. He may use Trump’s short hospital stay as evidence of the progress made with regard to therapeutic drugs and to boost the president’s position that Americans shouldn’t let coronavirus “dominate” their lives.

Both vice presidential nominees are seasoned debaters. During her ill-fated presidential primary bid, Harris participated in several debates and made headlines for her zingers, including a clash with Biden over busing to integrate schools. Expectations are high for her in the matchup against Pence, who hasn’t participated in a debate since 2016 but has held his own ground in the past.

In an interview with Hillary Clinton for her podcast “You and me Both,” Harris spoke about the challenges of preparing the debate, including her expectation that Pence could offer “a series of untruths” from the debate stage.

“I don’t necessarily want to be the fact checker,” Harris said in the interview. “At the same time, you know, depending on how far he goes with whatever he does, he’s going to have to be accountable for what he says.”

Pence has called Harris a “skilled debater” and has told supporters at campaign events that he looks forward to being on stage with her, though he has remained mostly tight lipped about his expectations or how he’s been preparing for the matchup.

In 2016, Pence participated in the vice presidential debate against Sen. Tim Kaine and was seen to have successfully thwarted attacks over comments Trump made about women and Mexican immigrants, as well as his policy proposals.

During his debate against Kaine, Pence was disciplined, poised and polished and largely waited for his turn to get a response in.