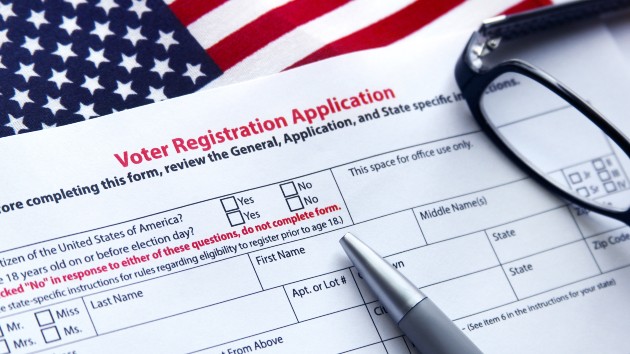 The decision comes hours after voters across the state encountered problems with the registration website, Registertovoteflorida.gov, as the clock ticked toward the initial midnight deadline.

“We are working with local Supervisors of Elections and the Florida Department of Highway Safety and Motor Vehicles to ensure that all eligible registrants have the ability to submit a voter registration application by 7:00 pm this evening,” Secretary of State Laurel Lee said in a public notice released Tuesday afternoon.

According to Lee, the website was inundated with over a million requests per hour in the final hours before the deadline.

“We will work with our state and federal law-enforcement partners to ensure this was not a deliberate act against the voting process,” she added.

Just before 6 p.m., Secretary of State Laurel Lee posted on Twitter announcing the website’s functions had been restored and that a “high volume” of visitors caused delays for about 15 minutes.

OVR is online and working. Due to high volume, for about 15 minutes, some users experienced delays while trying to register. We have increased capacity. You can register until midnight tonight.
Thank you to those who immediately brought this to our attention.

Hours after the announcement, however, the website was still giving people fits.

Destinee Morin, a recent high school graduate from St. Cloud, who is already registered, spent much of Monday unsuccessfully refreshing the website, Registertovoteflorida.gov, in an attempt to register two friends, both of them teenagers and would-be first-time voters.

Morin said she had problems since mid-afternoon.

“If the website is down, that’s not fair. A lot of people went on that website today because they didn’t realize it was their last day to register,” she said. “I really hope they extend it.”

Carl Morelli, a 23-year old Gainesville resident looking to update his registration after moving to a new apartment in August, tried the website for the first time at 9:15 p.m. but was met with glitches after completing the first step. After more than two hours of switching internet browsers and even computers, he almost gave up.

“It was getting down to the last 10 minutes and I was about ready to throw in the towel, but I said, ‘Let me just give it a few more tries,"” he told ABC News.

“I was really happy and excited that I was going to be able to vote,” he said.

Others weren’t so lucky.

Kyle Redula, 20, a student at Palm Beach Atlantic University in West Palm Beach, was eager to register to vote for the first time, only to find himself struggling for hours with the website Monday. As the deadline came and went, he was still receiving error messages.

“It’s definitely something that I was looking forward to,” he told ABC News. “Considering this is the Department of State website and it’s been giving me problems, it’s been frustrating.”

The issues with the website prompted angry responses on Twitter from Democrats in the state, among them Nikki Fried, Florida’s commissioner of agriculture and consumer services, and Florida’s lone statewide elected Democrat.

In a later post, Fried wrote that the developments Monday night amounted to “voter suppression” and called on Lee and DeSantis to extend the registration deadline.

Not planning for a voter registration surge is voter suppression.

Not ensuring everyone who wants to register can do so is voter suppression.

The Lawyers’ Committee for Civil Rights Under Law, the ACLU of Florida, and Campaign Legal Center sent a letter to the Department of State Monday night demanding the deadline be extended until midnight Tuesday. The letter, signed by Julie Houk of the Lawyers’ Committee and addressed to the department’s general counsel, suggested “other legal remedies” if their demand was not met.

On Tuesday, Lee released a statement saying that the state is looking into Monday’s issues. “We’re exploring all options to ensure that all eligible registrants have the ability to register to vote and will work with our state and federal law-enforcement partners to ensure this was not a deliberate act against the voting process.”

Here’s a state-by-state guide to voting in the age of COVID-19.

‘Live in Front of a Studio Audience’ returns with lighthearted take on ‘Facts of Life’ and ‘Diff’rent Strokes’
The “snot”-so-fun joys of parenthood, according to Katy Perry and Orlando Bloom
Pence’s former chief of staff, Marc Short, subpoenaed by Jan 6. committee
“She didn’t need any more training. She got me.” — Father of Rust armorer speaks out after fatal set shooting
Hawaii governor declares state of emergency over ‘catastrophic’ weather
Watch extended sneak Peeks of ‘The Bachelorette’ and ‘The Bachelor’