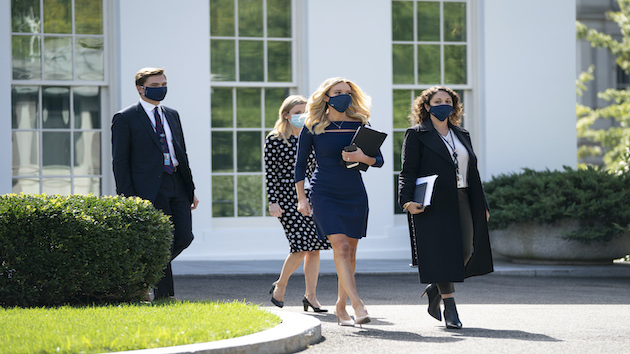 (WASHINGTON) — Fear and anxiety among White House staffers hit a new level Monday after White House press secretary Kayleigh McEnany revealed that she and two of her aides were positive for the coronavirus, sources said.

McEnany and her staff became the latest members of the administration to test positive for the virus after Trump’s senior adviser Hope Hicks’s diagnosis was revealed last week, followed by the president, first lady and others.

All this comes as Trump, who was hospitalized at Walter Reed Friday afternoon, demanded to return to the White House despite his senior advisers and members of his own family encouraging him to stay put and get the care he needs, according to sources. Trump tweeted he is expected to leave the hospital Monday evening.

So far, ABC News has confirmed 17 individuals who have been on the White House grounds or in contact with President Trump have tested positive for the coronavirus.

Multiple White House sources told ABC News there is “a full-blown freak-out” in the administration waiting to see who will be next to test positive — with aides not trusting each other and some trying to find ways to avoid coming into work at all. “Because we’ve had some cases in the West Wing, more people are working remotely today than in previous days, and that’s the way the process is supposed to work,” White House deputy press secretary Brian Morgenstern said Monday afternoon.

The sources added that there weren’t many staffers in the West Wing Monday afternoon and there was a lot of regret for not taking the coronavirus more seriously by not wearing masks and social distancing regularly.

Trump and his campaign have held numerous events both at the White House and elsewhere over the past week in which guests and dignitaries were photographed overwhelmingly not wearing masks and social distancing.

That included an event in the Rose Garden last Saturday to announce Judge Amy Coney Barrett as Trump’s nominee for the Supreme Court. Several people who attended that event have tested positive for coronavirus, leading some experts to suggest it might have been a superspreader event.

The White House largely relied on a system of temperature checks and COVID tests, but that system, some sources said, was either loosely followed or kept only to aides who were expected to have direct contact with the president or vice president.

As recently as Friday, before the president was transferred to Walter Reed Hospital, sources had describe a culture that discouraged individuals from wearing masks inside the White House.