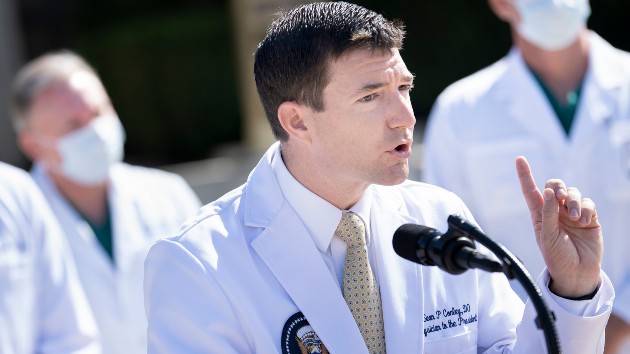 (NEW YORK) — The chief White House physician was facing heavy scrutiny over the weekend for obscuring aspects of President Donald Trump’s health after he was diagnosed with COVID-19, focusing attention on the vexing challenge he faces navigating the demands of an anxious nation and a commander-in-chief who favors rosy assessments.

“When you’re in a complicated situation like this, you can only go so far,” said Dr. Benjamin Aaron, the chest surgeon who in 1981 removed the bullet from President Ronald Reagan, and said he and his colleagues “felt a sense of duty to level with the American people.”

“It’s appropriate to be open, but there has to be a certain amount of implied trust” with his VIP patient, he said.

The man standing at the crossroads of these competing interest now is Dr. Sean Conley, an Afghan War veteran and military physician who has addressed reporters twice over the weekend about the president’s battle with the novel coronavirus, a diagnosis he received late last week.

Conley offered conflicting statements about the president’s health status and treatment timeline, prompting a crisis of credibility emanating from the esteemed hospital’s medical staff. On Saturday, Conley said he and his staff were “extremely happy with the progress the president has made,” and described his symptoms as mild. But after the briefing concluded, White House chief of staff Mark Meadows offered a vastly more dire prognosis, calling the president’s vitals on Friday “concerning.”

Conley attempted to clean up the diverging takes on Sunday, telling reporters that Meadows’ comments had been “misconstrued,” but acknowledged he was “trying to reflect the upbeat attitude of the team and the president, over the course of the illness, has had,” in describing the president’s status.

“I didn’t want to give any information that might steer the course of illness in another direction,” Conley said, “and in doing so, it came off that we were trying to hide something, which wasn’t necessarily true.”

The president’s critics have accused the White House of deliberately misleading the American people. Senate Minority Leader Chuck Schumer, of New York, issued a call on Sunday for the full details of Trump’s health status to be released, along with the names and health status of everyone who has tested positive at recent related events.

“When you don’t have full transparency, when there’s cover-ups, contradictory statements, even lying about something as vital to the nation’s security as the president’s health, the nation is severely endangered,” Schumer said.

White House Communications Director Alyssa Farah sought to defend Conley’s apparent reversal Sunday on Fox News, claiming that it is a “very common medical practice” to “convey confidence and you want to raise the spirits of the person you’re treating.”

The challenges Conley faces now are not new — but may be heightened given Trump’s past proclivity to shroud his health assessments in secrecy. After his 2016 presidential bid, for example, a New York-based doctor who penned a glowing letter proclaiming that Trump would “be the healthiest individual ever elected to the presidency,” said the president had dictated the letter to him for publication under the doctor’s name. In 2019, the president made an unannounced visit to Walter Reed Medical Center for what Conley later described as “a routine checkup.”

But in this current medical crisis, experts not involved in the president’s treatment described to ABC News the difficult balance Conley must try to strike. Dr. Mark Siegel, a Yale University critical care physician and medical ethicist, said scrutiny of the Walter Reed physicians underscores the unique tension of transparency in treating a president.

“The physicians who are sharing information with the public have to wrestle with these competing interests,” Siegel said. “One is to protect the privacy of their patient, but I think an overriding concern is that the public has a right to know how their president is doing.”

A challenge for past presidents

Balancing the competing interests described by Siegel is hardly a new challenge for those who treat presidents of the United States. In fact, obscuring the sometimes dire medical conditions of a sitting president has significant precedent in American history.

In 1893, Grover Cleveland went so far as to undergo surgery on a yacht to avoid media attention. When William McKinley nearly died of pneumonia in 1901, his spokesperson slammed reporters’ inquiries as “foolish stories.” Perhaps most famously, aides to Franklin Delano Roosevelt long sought to hide their boss’ paralysis.

After Reagan was shot outside the Washington Hilton, Aaron said the medical team made a pointed effort to present a clear message to the public.

“We didn’t want to put out a hodgepodge,” he told ABC News in an interview on Saturday. “We wanted to report accurately on what’s going on, not create missed information, misdirection and misinterpretation.”

Aaron watched the Saturday briefing at Walter Reed and commended Conley’s professionalism. But he marveled at how the pressure of transparency has evolved in an era of social media and polarized politicization.

After Reagan was shot, Aaron said he and his medical team “let the dust settle” before divulging details of his condition. The president’s medical staff waited multiple days before offering a “full accounting of the facts” — but even then made strategic omissions.

“In a situation like this, the doctors have to be as professional, and as truthful, as they can be,” Aaron said. “Honesty is the best policy in all regards, but honesty does not necessarily mean lay it all out, lay all the blood on the table for the public to try to digest.”

As for the historical precedence, Aaron said examples of past presidents hiding ailments for political purposes further illustrates the evolution of transparency and what is expected of leaders who fall ill.

“Look at Roosevelt — there was nothing transparent about his care at all. There are an awful lot of people in this country never even knew he was paralyzed,” Aaron said. “Same thing with a number of other presidents along the way and, admittedly, a lot of this stuff was done for devious goals — and so the whole issue of what transparency amounts to, and responsibility of transparency, has been evolving over the years.”

Critics have latched onto Conley’s opaque descriptions of Trump’s vital biometrics. Dr. Seema Yasmin, a former CDC investigator and science communications professor at Stanford University, called the press briefing “a master class in all the things not to do.”

“This was a physician who was prevaricating, who was speaking half-truths, and just not being transparent and giving us clear answers to very basic questions,” Yasmin said Saturday on CNN.

David Gergen, an aide to Reagan who briefed reporters in 1981 the day the president was shot, said Sunday on CNN that “the most important lesson is to tell the public the hard truths – the unvarnished truths – and do it in a competent way.”

Under normal circumstances, doctors are limited in what they can divulge publicly about their patients under stringent rules dictated by the Health Insurance Portability and Accountability Act of 1996 (HIPAA). But with a president, there is no clear roadmap for what information Americans deserve to know in the context of patient privacy.

Regardless of how much information the president’s medical staff is willing to share, doctors “have an ethical duty to be honest and not to share information that’s misleading,” added Siegel, the Yale ethicist.

Aaron said that same sense of duty guided his team’s decisions back in 1981.

“Our purpose was just to put the facts out as they were,” Aaron said. “History sort of demanded that – that there be a true, and well-documented historical record of a major event in American history.”