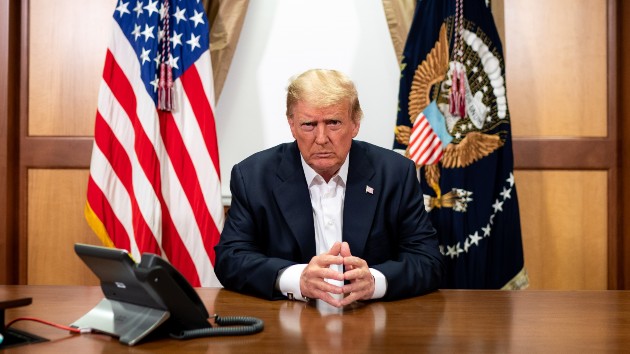 (WASHINGTON) — President Donald Trump’s condition is continuing to improve as he fights a coronavirus infection, doctors say, and he may be able to leave Walter Reed Medical Center as early as Monday — even as details emerge that the president allegedly initially tested positive for COVID-19 earlier than he acknowledged.

Yet the president was feeling well enough Sunday evening to briefly leave Walter Reed for a surprise drive-by, waving to supporters outside the hospital.

Administration member Judd Deere subsequently put out a statement saying that, “President Trump took a short, last-minute motorcade ride to wave to his supporters outside and has now returned to the Presidential Suite inside Walter Reed.”

There have been no updates on Trump’s condition from his physicians since earlier in the day, when they told reporters he could be released as early as Monday.

Meanwhile, numerous questions remain about how many people at the highest levels of government had been exposed to the virus after a week of events involving the president where social distancing and mask-wearing were lax in the White House and elsewhere.

White House press secretary Kayleigh McEnany tweeted on Monday that she has tested positive for the coronavirus.

McEnany said she had consistently tested negative every day since Thursday, but the positive result came back on Monday morning.

She said she is not experiencing any COVID-19 symptoms and will begin the quarantine process.

First lady Melania Trump said she is “feeling good & will continue to rest at home” in a tweet she posted Monday morning.

My family is grateful for all of the prayers & support! I am feeling good & will continue to rest at home. Thank you to medical staff & caretakers everywhere, & my continued prayers for those who are ill or have a family member impacted by the virus.

President Trump announced early Friday morning that he and Melania Trump had both tested positive for the coronavirus.

Melania Trump has stayed at the White House since her positive test, while President Trump has been at Walter Reed Medical Center since Friday afternoon. Doctors are hopeful the president will be discharged later Monday.

Vice President Mike Pence and second lady Karen Pence both tested negative for the coronavirus on Monday, according to an official in the vice president’s office.

“Both the vice president and second lady are negative again today,” the official said.

Staff at the White House were urged to stay home if they were sick days after President Trump and some of his advisers tested positive for the coronavirus, according to an email sent to the staff and obtained by ABC News.

One of Trump’s closest advisers Hope Hicks was the first White House official to test positive on Wednesday, sources told ABC News. On Tuesday, she had traveled with the president on Air Force One to and from the debate and was seen in social media posts watching the debate in a “war room.”

The email to White House staff urges them to stay home if “you are experiencing symptoms such as sore throat, cough, fever, headache, new loss of taste or smell, muscle aches, chills, diarrhea, or difficulty breathing.”

Oct 05, 8:43 am
Meadows ‘optimistic’ Trump will be released from hospital today

White House chief of staff Mark Meadows told ABC News the determination whether to release President Trump from Walter Reed Medical Center will be made later on Monday between the president and his medical team.

While a determination has not been made as of yet, Meadows says he’s “optimistic” Trump will be back at the White House later in the day on Monday.

Doctors on Sunday also said at a press briefing that they were hopeful that Trump could be released on Monday.

Oct 05, 8:26 am
Trump appeals to voters in tweets from hospital suite

President Trump, who is still at Walter Reed Medical Center receiving treatment for the coronavirus, fired off a series of voting and election-related tweets on Monday morning.

Trump tweeted about tax cuts and what he says would happen if Democrats were in charge.

IF YOU WANT A MASSIVE TAX INCREASE, THE BIGGEST IN THE HISTORY OF OUR COUNTRY (AND ONE THAT WILL SHUT OUR ECONOMY AND JOBS DOWN), VOTE DEMOCRAT!!!

He also appealed to voters in Virginia, where Trump claims the governor is trying to “obliterate your Second Amendment.”

Philips, who is not treating the president, tweeted on Sunday that he thought the event was “insanity” and that it risked the health and lives of the Secret Service agents involved in the spectacle. He expanded on his thought process early Monday morning.

“I have serious concerns that in any automobile, masks or not masks, there’s a very high risk of transmission,” said Philips. “And then add into the mix that that’s not any vehicle. That’s a hermetically-sealed vehicle that is designed to be impenetrable to chemical attacks. Therefore the amount of circulation inside is even poorer than we would expect from a normal vehicle. And as a physician, we look at the decisions we make as risks versus benefits.”

Philips continued: “I don’t know what the benefits of this political stunt were, but I do know what the risks were. And my concern is that perhaps the secret service agents that were inside don’t know the full risk of what they were up against there and what the real threats were. And so far as the military and Johns Hopkins physicians who are taking care of this patient, they’re excellent. But they’re also under undue pressure and a lot of influence outside of that normal physician-patient relationship.”

When Philips was asked about whether or not the American public should be concerned about the information they are receiving about the president’s health, Philips said that the doctors and nurses involved in Trump’s care have the utmost of integrity.

“The president is a patient,” explained Philips. “He has a right to privilege. But it’s difficult whenever the information provided to the constituents is filtered through a lens of trying to paint a rosy picture. And I don’t think that people were being dishonest. I just think that there’s difficulty whenever you’re pressured to say certain things and thrust into a job that these doctors were never expected to be thrust into.”

Oct 05, 4:53 am
President wants to leave hospital as soon as possible

Sources tell ABC News that President Trump was in good spirits Sunday, and was insisting that he wants to leave Walter Reed Medical Center as soon as possible.

A timetable on Trump’s release was still not finalized as of Sunday night, sources said. Doctors said earlier Sunday that Trump could leave the hospital as early as Monday.

Another ‘Grey’s Anatomy’ episode, another surprise visit from the Great Beyond for Meredith
Coronavirus live updates: Virus ‘has entered a phase of high-level transmission’ in US
One-year-old boy shot dead in ‘heinous crime,’ reward offered for information: DC mayor
NASA will pay a firm $1 to go to the moon and get a sample
Aubrey Plaza says she was initially “terrified” to take on challenging ‘Black Bear’ role
“I don’t need to prove anything” – Jennifer Lopez credits ‘Hustlers’ Oscar snub for new attitude