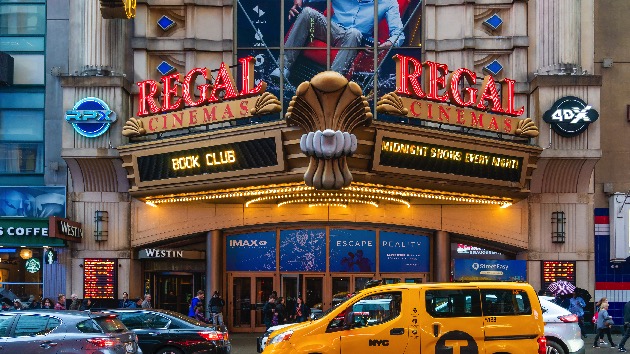 (NEW YORK) — Regal, the second-largest cinema chain in the U.S., announced Monday it will temporarily be closing all theaters as the COVID-19 pandemic rages on and continues to clobber the movie theater industry.

The announcement comes just months after the chain began reopening in late August. Cineworld, the parent company of Regal, said the closures will go into effect starting this Thursday at all 536 Regal theaters in the U.S.

“This is not a decision we made lightly, and we did everything in our power to support a safe and sustainable reopening in the U.S. — from putting in place robust health and safety measures at our theaters to joining our industry in making a collective commitment to the CinemaSafe protocols to reaching out to state and local officials to educate them on these initiatives,” Mooky Greidinger, CEO of Cineworld, said in a statement announcing the closures.

“We are especially grateful for and proud of the hard work our employees put in to adapt our theaters to the new protocols and cannot underscore enough how difficult this decision was,” he added.

The closures will impact approximately 40,000 employees across the U.S. Movie studios have thus been reluctant to release many new films, wreaking havoc on the industry as a whole.

Greidinger specifically blasted movie theater closures in New York while other indoor activities in the city have since reopened in the state.

“Despite our work, positive feedback from our customers and the fact that there has been no evidence to date linking any COVID cases with cinemas, we have not been given a route to reopen in New York, although other indoor activities — like indoor dining, bowling and casinos were already allowed,” Greidinger said.

“The prolonged closures have had a detrimental impact on the release slate for the rest of the year, and, in turn, our ability to supply our customers with the lineup of blockbusters they’ve come to expect from us,” he added. “As such, it is simply impossible to continue operations in our primary markets.”

The announcement from Cineworld came just days after the studio and producers behind the upcoming James Bond film No Time To Die announced that the film’s release would be delayed until April 2021 instead of November of this year.

“We understand the delay will be disappointing to our fans but we now look forward to sharing ‘No Time To Die’ next year,” MGM, Universal and Bond producers said in a statement on the film’s website last Friday.

In an interview with Variety, the head of the National Association of Theatre Owners, John Fithian, put the blame on the delay of No Time to Die solely on New York Gov. Andrew Cuomo.

“The failure of Gov. Cuomo to allow movie theaters to reopen anywhere in his state was a principal, if not exclusive, cause of the Bond move,” Fithian told the outlet. “If New York remains closed to theater operations, other movies scheduled for 2020 will move as well.”

“Our recommendation, our urgent plea, is for Gov. Cuomo to allow movie theaters to reopen in the portions of the state that aren’t having spikes in the virus,” he added. “There are now only two states that are entirely closed to moviegoing — New York and New Mexico.”

Regal did not give a date for when it planned to reopen the cinemas, saying it will continue to monitor the situation and announce any further plans to reopen at the appropriate time.

Meanwhile, AMC, the largest cinema chain in the nation, announced last week that it will finally reopen 80% of its U.S. theaters by the end of this week — including a handful that have been shuttered since March. The company previously announced that the reopening will “significantly” limit seating capacity and mask wearing will be enforced for all guests and employees.

Coronavirus live updates: US virus cases may be about 8 times higher than reported
New storm system to travel across the South this weekend
Black Friday 2020: Tips on the best deals to look out for
Michael Jordan donates $2M of proceeds from “The Last Dance” to food banks
Coronavirus live updates: US reports over 110,000 new cases on Thanksgiving
George Floyd’s brothers on the fight for justice, remembering him on Thanksgiving