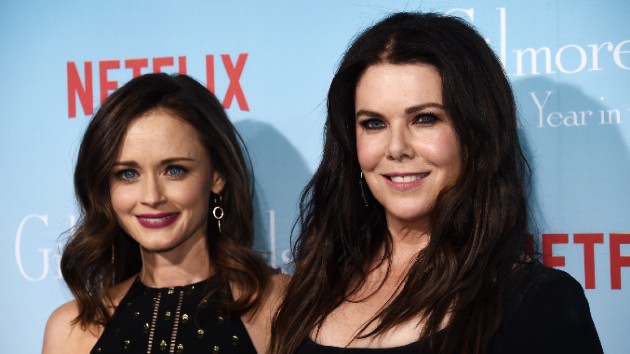 The series ran for seven seasons, from 2000 to 2007. A four-part miniseries continuation, titled Gilmore Girls: A Year in the Life, streamed on Netflix in 2016, and will get its network debut on The CW with a four-night event beginning Monday, Nov. 23, at 8 p.m. ET.

Gilmore Girls was famously overlooked in the awards department, winning just one Emmy for makeup in 2004 and garnering a single Golden Globe nomination for Graham in 2001. Despite this, it was a hit with critics and viewers alike, back then and to this day.

For the show’s 20th anniversary, Good Morning America caught up with a few of the series’ stars to discuss its legacy.

“It’s unique,” says Keiko Agena, who played Rory’s best friend, Lane Kim, adding it “exists in this slightly different universe” from our own. “[It’s] a comforting, fun show to go back to and I think, especially now and at times where our lives feel stressful, it can feel almost like a home base, like a safe space.”

“I certainly think there’s a heart and a center to the show that is around kindness and community,” adds Sean Gunn, who played Kirk. “We could certainly use a little bit more of that in the world.”

So will the cast ever revisit Stars Hollow?

Rose Abdoo, who played Gypsy, says, “There are people who I think still want more. People ask me all the time would I do more? Of course I would do it again. That would be great.”

Forest management could reduce carbon dioxide emissions by billions of tons a year: Study
Coronavirus live updates: Ex-CDC head warns of ‘bumps in the road’ with vaccination
Meadow Walker honors her late father on seventh anniversary of his death
‘The Disney Holiday Singalong’ brings screen stars and Broadway talent together for heartwarming show of unity
Nonpartisan report warns of COVID-19 testing shortages in over half US states, territories
Justices skeptical of Trump bid to exclude all undocumented immigrants from census