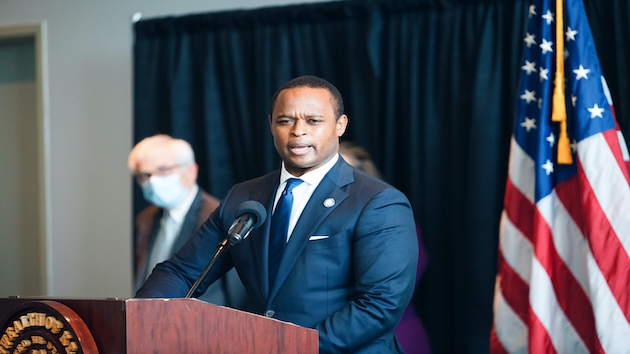 (NEW YORK) — A Kentucky judge gave the state’s attorney general three days to file a response to a motion from an anonymous grand juror who asked for permission to speak freely about the Breonna Taylor case.

The grand juror, who accused Cameron of using the jurors as a shield to deflect accountability, also asked that the grand jury proceedings be considered a moot point or debated openly in court.

A hearing will be held Thursday via Zoom video conference. Kentucky Assistant Attorney General Victor Maddox called the motion “effectively unprecedented” in a statement to the Courier Journal.

“We want a chance to respond so issues can be appropriately addressed,” Maddox said Monday.

“The grand juror we represent felt compelled to take some sort of an action based upon the indictment rendered in the subsequent press conference from the AG’s office about out how everything played out,” Glogower said at a press conference last week. “But before our client can discuss these things freely, they needed to know the rights and duties as deemed by the court.”

The deadline announcement came just days after the attorney general’s office released some 15 hours of recordings from the three-day grand jury hearings in compliance with a judge’s order.

Former Louisville Metro Police Department Officer Brett Hankison is facing three counts of wanton endangerment, but neither he nor the two other officers involved in the shooting were charged with murder or manslaughter or charges related to Taylor herself or her boyfriend.

Taylor, 26, was shot and killed by Louisville, Kentucky, police officers after they allegedly executed a no-knock entry “due to the nature of how these drug traffickers operate,” according to the arrest warrant obtained by ABC News.

Taylor and her boyfriend, Kenneth Walker, got out of bed around midnight when they heard a commotion outside. After a short exchange with police, Walker says he fired his gun in self-defense, saying he thought the home was being broken into, according to police.

Director Carl Weathers laughing along with ‘The Mandalorian’ fans about errant “Jeans Guy”
Amber Riley is engaged: “I’m looking at a man who changed my mind” about “love”
As he ignores election defeat, Trump to pardon turkey
Mary Steenbergen says her ‘Happiest Season’ character was very familiar to her
Georgia to begin Trump campaign-requested recount of presidential contest Tuesday
Storm in Central US to bring snow to parts of Midwest