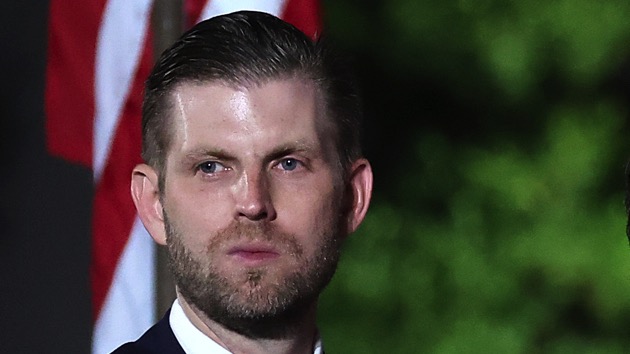 (NEW YORK) — Eric Trump, the president’s son, is being deposed Monday about the Trump Organization, for which he serves as an executive.

Investigators with the New York attorney general’s office are deposing Trump as part of an investigation into whether President Donald Trump’s namesake company improperly inflated the value of certain assets to get tax benefits, according to a source familiar with the probe.

Eric Trump was ordered to appear for a deposition by Oct. 7 after a Manhattan judge rejected his attempt to delay testimony until after Election Day.

Trump said on Twitter on Sept. 23 the investigation’s “sole focus is an anti-Trump fishing expedition that she promised during her campaign,” referring to New York Attorney General Letitia James.

The investigation involves at least four properties, including the Seven Springs estate in Westchester, originally built by Eugene Meyer, a former publisher of the Washington Post. The attorney general is looking at the estate’s conservation easement and whether it was inflated “for the purpose of taking a larger tax deduction that would otherwise have been permitted,” a lawyer in the attorney general’s office said last month.

“To be clear, no entity or individual is allowed to dictate how or when our investigation will proceed or set the parameters of a lawful investigation,” James said in September about Trump’s attempt to delay his deposition.