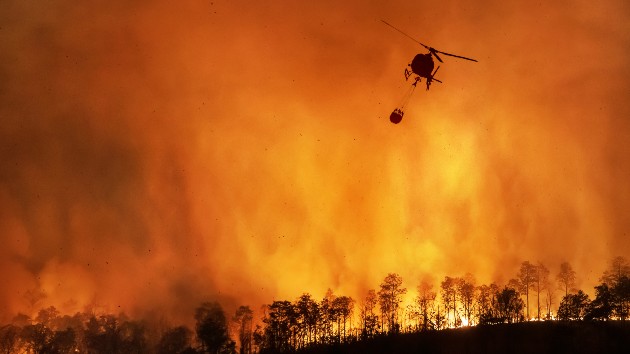 (NEW YORK) — In already the worst wildfire season in California history, the state marked another grim milestone on Sunday when it surpassed 4 million acres burned, more than doubling the previous single-year record set in 2018.

“We are dwarfing that previous record, and we have a lot of season left to go,” said Chief Thom Porter, director of the California Department of Forestry and Fire Protection, also known as Cal Fire.

Firefighters have battled at least 8,136 different fires across the state, most occurring since mid-August. The fires have claimed at least 31 lives and destroyed more than 4,600 residential and commercial structures, according to Cal Fire.

More than 20 fires continued to burn across the state on Sunday. The largest conflagration is the August Complex fire in Northern California, which was started by a lightning strike on Aug. 16 and had burned nearly 1 million acres by Sunday.

The August Complex fire, which is currently 51% contained, was burning across parts of Mendocino, Humboldt, Trinity, Tehama, Glenn, Lake and Colusa counties.

The most worrisome blaze continued to be the Glass Fire burning across parts of Sonoma and Napa counties, according to Cal Fire. As of Sunday morning, the Glass fire had consumed nearly 65,000 acres and destroyed at least 826 structures since it started on Sept. 27 — including more than 200 homes and wineries in the famed wine country region. The cause of the fire remains under investigation.

The Glass Fire was just 17% contained on Sunday and new evacuation orders were issued for parts of northern Napa County.

Meteorologists are forecasting cooler temperatures and a chance of rain in Northern California this coming week.