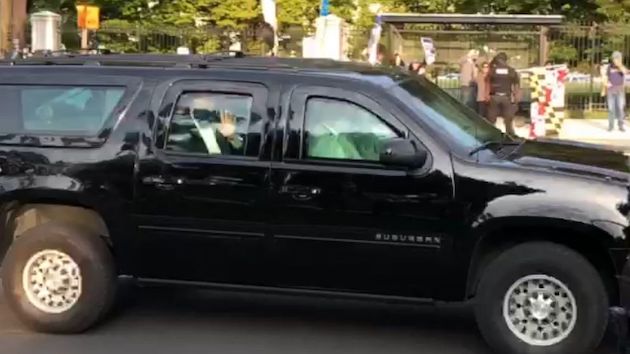 (NEW YORK) — As more White House officials test positive for COVID-19, attention is turning to the safety of U.S. Secret Service agents who are tasked with protecting the president.

Agents were seen Sunday afternoon in the front seat of an armored SUV while President Donald Trump took a ride outside the Walter Reed Medical Center to wave to supporters while the president was likely still infectious, according to experts.

“The Secret Service does not discuss our protectees or the specific means and methods regarding our protective mission,” the spokesperson said.

During an update on the president’s health, Dr. Sean Conley said the agents in the vehicle were wearing full personal protective equipment.

Experts say the incident brings to light one of the challenges that come with protecting the president — saying no.

The president can usually go anywhere, and it is the Secret Service’s job to ensure that the president gets there safely — whether it is traveling to a war zone or walking across the street to Lafayette Park.

Retired senior Secret Service agent Don Mihalek, an ABC News contributor, said the president’s security detail is at times caught “between a rock and a hard place” when a president wants to do something that is potentially unsafe, like President George W. Bush’s returning to D.C. during the 9/11 attacks.

Often the Secret Service has to work with subject matter experts and figure it out, Mihalek said.

“So intrinsically it’s a difficult job because you’re protecting the top target in the world,” he said.

But the matter cuts both ways. While visiting Paris in November 2018, Trump said that he could not to go to nearby Aisne-Marne American Cemetery to commemorate lost World War I troops because the Secret Service said so.

Because of bad weather, the security detail would have had to motorcade through the city and not use Marine One, the helicopter that usually transports the president.

“When the helicopter couldn’t fly to the first cemetery in France because of almost zero visibility I suggested driving,” Trump tweeted. “Secret Service said NO, too far from airport & big Paris shutdown.”

“The height of reckless disregard for others was the President’s ‘joyride’ yesterday where Secret Service agents were required to drive him around in a hermetically sealed vehicle,” Thompson said in a statement Monday. “Exposing Secret Service personnel to the virus does not just put them at risk, it puts their families and the public at risk.”

Both Mihalek and another retired Secret Service special agent told ABC News that it is often a compromise between agents and others around the protectee.

“Our job is to make that activity as safe as possible for them,” the former agent, who spoke to ABC News on the condition of anonymity, said of the president. “There are inherent risks in many law enforcement operations and that is certainly increased from a health perspective during a pandemic.”

Mihalek said that it appears from video that the agents in front were wearing masks and some sort of protective covering over their clothes. He also noted that some of the armored vehicles that carry the president have protective barriers inside that can restrict the airflow between the front compartment where the driver and front passenger sit, and the rear part of the cabin that holds the president. That would mean that the agents in front would not have had to breathe the same air as Trump.

The COVID-19 pandemic has presented unprecedented challenges in protecting the president, said Mihalek, but agents still do an “amazing” job.

The retired agent who spoke to ABC News also pushed back on reports that the agents were taking their cues directly from the president.

“The Secret Service has established protocols and procedures that are followed through a chain of command,” he said. “No agent should ever take it upon themselves to violate a protective procedure unless cleared by a supervisor, or if there was immediate danger of injury or death.”