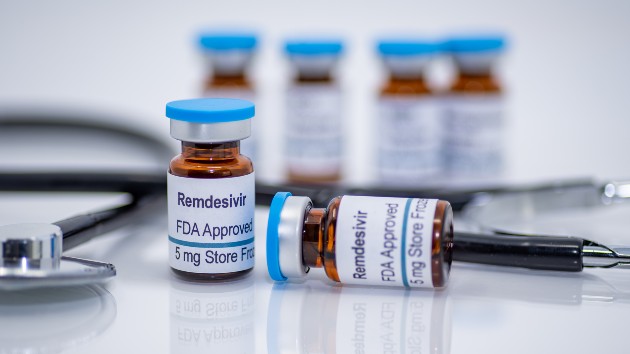 (NEW YORK) — The leader of the free world is now fighting his own battle with a virus that’s laid global siege — and a concoction of some experimental treatments is helping him do it.

Roughly 42 hours after President Donald Trump revealed he and the first lady had tested positive for COVID-19, he tweeted out a video from Walter Reed National Military Medical Center assuring the public he was feeling “much better” since being given a sundry mix of medication which he called “miracles coming down from God.”

Uncertainty and fear for the president’s well-being plunged a nation already in chaos into further crisis, amid a pandemic that has already killed more than 209,000 Americans.

Over the weekend, Trump’s personal physician, Dr. Sean Conley, said the president is “receiving all the standard of care and beyond,” doctors are “attacking the virus with a multi-pronged approach” and he has “continued to improve.”

Of the combination of medicines and supplements now deployed to help him recoup, much of it is not yet definitively known to beat the novel coronavirus, but is thought to help mediate the virus’ symptoms and severity. There is as of now no drug “approved” by the Food and Drug Administration for COVID-19 treatment, though some have been given emergency authorization.

Some experts have raised questions about the uniquely robust drug regimen now being administered to the president. Dr. Lew Kaplan, president of the Society of Critical Care Medicine and a surgeon at the University of Pennsylvania, says that these types of “non-standard processes” can “invite error.”

National Institutes of Health treatment panel guidelines member Dr. Mitchell Levy insisted that there is no “miracle” drug yet available.

“If you look at our guidelines, we just don’t think there’s enough evidence to recommend one way or the other,” Levy, chief of pulmonary critical care at Warren Alpert Medical School of Brown University, told ABC News. “So little is proven. It’s like the Wild West, and he’s the president of the United States, and so you feel like, I want to do anything I can to prevent the disease from progressing. That often drives us to do things outside of the normal standard, and that is never a good idea. There’s a standard of care for a reason. With COVID-19, part of the problem is we’re never really sure what the standard of care is.”

Other experts are more optimistic.

“All of these treatments shift the odds in your favor,” Dr. William Schaffner, professor of preventive medicine and infectious diseases at Vanderbilt University Medical Center, told ABC News.

“None of them is a magic wand that suddenly makes you feel better,” he said, explaining that Trump’s treatment plan was made respecting the parameters of available science.

The president’s doctors have said he is taking at least eight medicines and supplements. The timeline of Trump’s illness remains murky; however, here’s what we know about what the president is taking — and when he started taking it:

Trump received an intravenous infusion of the antiviral drug on Friday, within 24 hours of revealing his diagnosis. Initially developed for Ebola treatment, it has solid evidence supporting its use in COVID-19 patients, according to the National Institutes of Health, and based on that promising potential, the FDA has issued emergency authorization for its use. Typically given to patients with severe infection, it works by hindering the virus’ replication in the body. As of Sunday, Trump was on day three of a five-day course.

Trump is taking a cocktail of two synthetic, pharmaceutical versions of what occurs naturally in the body to fight off infection. A mix of monoclonal antibodies, this one made by biotech company Regeneron, is thought to be promising, though still in its experimental phase. Late last month, Regeneron published positive, yet preliminary data for its cocktail treatment showing it improved symptoms in patients without severe disease.

While it is not yet FDA-authorized, Trump has been granted access to it under “compassionate use,” enabling him to get it outside of a clinical trial. A Regeneron spokesperson confirmed to ABC News that Trump’s medical staff reached out to them for permission to use their monoclonal cocktail, and it was cleared with the FDA.

On Sunday, Conley, Trump’s personal physician, announced they had begun treating him with the steroid Dexamethasone, in response to two temporary drops in his oxygen levels. It’s a corticosteroid used for its anti-inflammatory effects, and according to the National Institutes of Health, it has solid evidence supporting its use in COVID-19 patients. In severe cases, it’s thought steroids can fight the haywire inflammation caused by the virus; however in milder cases, one trial found “no benefit (and the possibility of harm) among patients who did not require oxygen.”

Schaffner told ABC News that though the press and public have not seen the president’s chest X-rays or CAT scans, prescribing the steroid is “a borderline indication within the physicians’ prerogative.”

Whatever was on those CAT scans, Schaffner said, along with his oxygen levels, seems “undoubtedly what targeted physicians’ decision to add dexamethasone” in hopes that it moderates his immune system response’s “collateral damage.”

Famotidine, more commonly known by its brand-name Pepcid, is an FDA-approved drug for heartburn, not COVID-19. Some early, observational studies showed improved survival amongst hospitalized COVID-19 patients. Still, experts caution that observational studies are no substitute for high-quality, randomized trials designed to demonstrate a treatment’s true effectiveness. A trial for an intravenous infusion of famotidine is still ongoing.

This is not the first time Trump’s doctors have prescribed him Zinc. In mid-May, Trump told reporters he had been taking both Zinc and Hydroxychloroquine as a “preventative” measure. On Friday, as his doctors listed off the treatments he would now receive for his infection, Zinc again appeared on the list. As an over-the-counter supplement, Zinc is subject to less regulatory oversight. Its virus-fighting properties have shown mixed results in prior studies.

Schaffner described Zinc, along with Vitamin D, as “adjunctive therapies, the benefits of which are not known.”

“There is some data that Zinc is helpful if you have the common cold,” he said. “But not COVID.”

Melatonin is a naturally-occurring hormone with antioxidant, anti-inflammatory properties also helping regulate circadian rhythms. Some researchers have suggested that the supplement might help compliment other COVID-19 treatments. At this point, research showing that this supplement helps COVID-19 patients is limited, but there is at least one small, randomized study ongoing in the U.S.

Available over the counter, aspirin have been prescribed internationally as concomitant treatment for COVID-19 — in response to the strange prevalence of clotting and pulmonary embolism doctors have seen crop up in some patients. Aspirin may also help reduce low grade fevers. On Saturday, the president’s medical team said he no longer had a fever, after less than a day’s time.

For people without COVID-19, daily aspirin use is no longer recommended as a way to reduce the risk of heart attacks, because the risks are now believed to outweigh the benefits.

The Jerky Boys are back, and just when we can use a laugh
Meet the ICU doctor who is going viral for embracing a COVID-19 patient
How state health departments might view Biden’s COVID response plan
Anne Hathaway shrugs off ‘The Witches’ comparisons to Anjelica Huston
‘Pandemic’ is named as 2020’s Word of the Year by Merriam-Webster
‘The Croods: A New Age’ tops weak Thanksgiving holiday weekend with $14.22 million