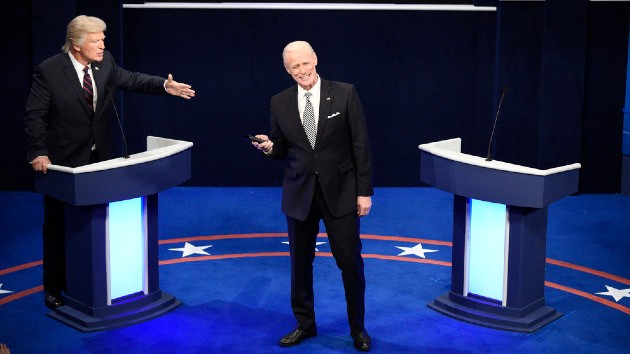 “Look man, I’m a nice guy, but you give anymore guff tonight, I’ll rip your face off like a mad chimp,” Carrey snapped, before muttering to himself, “The country’s counting on you, Joe.  Just stand here and look lucid.”

The sketch also addressed President Trump testing positive for COVID-19, as Baldwin — with his fingers crossed — assuring Beck Bennett’s Chris Wallace that he took the coronavirus test he promised to take in advance of the debate.

After using a TV remote control to pause Baldwin mid-sentence, Carrey joked, “just imagine if science and karma could some team up to send us all a message about how dangerous this virus can be.”

“I’m not saying I want it to happen. Just imagine it did,” he added.

Harry Styles also had a cameo, appearing in a thought bubble, to read Carrey’s Biden a calming, meditative story.

Biden fractures foot after fall, will likely be in walking boot ‘for several weeks’
‘The Croods: A New Age’ tops weak Thanksgiving holiday weekend with $14.22 million
Coronavirus live updates: Hospitalizations of COVID-19 patients hit all-time high in US
Bill that could help Black farmers reclaim millions of acres ‘a step in the right direction’
Supreme Court reviews Trump plan to exclude undocumented immigrants in redistricting
San Francisco 49ers not allowed to play in stadium for 3 weeks under new COVID-19 restrictions