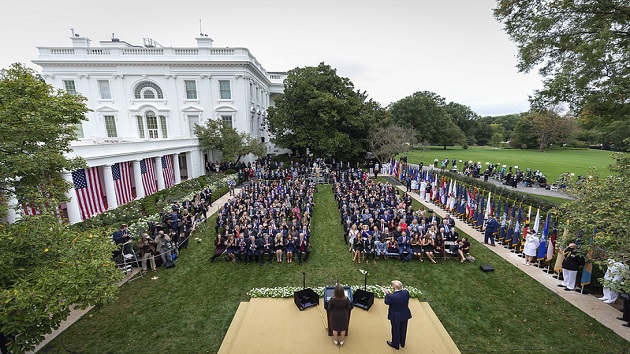 Amid the swirl of developments, sources told ABC News that Trump, who remains hospitalized, had been given supplemental oxygen and experienced shortness of breath, a potentially worrisome picture that appeared to contradict both the rosier statements from Trump’s doctor and assessments that he was doing well both on Twitter and elsewhere.

Speaking outside Walter Reed Medical Center in Bethesda, Maryland, on Saturday, Trump’s physician would not offer a clear, declarative statement about whether the president had received oxygen treatment since testing positive.

The press pool was told soon after by a “source familiar with the president’s health” that Trump’s “vitals over last 24 hours were very concerning and the next 48 hours will be critical in terms of his care.”

The lack of transparency and clarity from the White House contributed to a troubling pattern surrounding the events of the last week, including learning of Hope Hicks’ diagnosis by a media leak, as the U.S. faces a potential crisis of governance just a month before the election.

Numerous questions remained including how many people at the highest levels of government had been exposed after a week of events involving the president where social distancing and mask-wearing were lax and the integrity of the testing efforts at the White House and elsewhere.

ABC News spoke to one registered independent about his reaction to Trump testing positive and his activities leading up to the positive test result.

Rob Gorski, a former EMT and single father of three sons with autism in Akron, Ohio, said he was “very angry” that Trump “so willingly put so many people in harms way after knowing he’d been directly exposed to COVID-19.”

“Trump and the others in the White House may do just fine, and I hope they do recover because no one deserves to die like that. But what about everyone else who they infected? They may not recover and they may have been doing everything right. They don’t deserve that,” he said.

ABC News Live Prime spoke with Gorski and three other families of special needs kids about how they are surviving the pandemic and back-to-school season.

More on steroid treatment given to Trump

Doctors treating President Trump announced that he has been given the steroid Dexamethasone to combat symptoms of the coronavirus.

Dexamethasone, a steroid treatment, is seeing positive results in some patients.

A study in the United kingdom in June found that dexamethasone increased survival in severely ill COVID-19 patients who needed help breathing.

Trump’s condition is improving, doctors say, but he did have two episodes where his oxygen levels dropped.

Prescribing dexamethasone for President Trump may be appropriate considering he received oxygen at some point during his illness.

Although the U.K. study appeared promising, dexamethasone only was demonstrated to help patients who have severe COVID-19 and need help breathing, through ventilation or oxygen assistance. The steroid treatment has not been proven to help people with a more mild COVID-19 illness, which accounts for most cases.

In fact, it may not be safe to use in patients with mild illness. In the U.K. study, dexamethasone “non-significantly increases death if used in milder patients with COVID-19,” said Dr. Todd Ellerin, director of Infectious Diseases at South Shore Health. He warned that for patients with milder COVID-19 illness “the risks of the medication likely outweigh the benefits.”

This is the third day since President Donald Trump’s coronavirus diagnosis that they have received a negative test result.

Pelosi has not been updated on Trump’s condition

House Speaker Nancy Pelosi, D-Calif., in an appearance on CBS’s “Face the Nation” on Sunday, said she still hasn’t heard from the president’s team regarding his condition or any continuity of government matters.

“We’re getting our information the way everyone else is: in the media. But in terms of the succession, that’s an ongoing process. Sadly, at this time, it comes to the forefront,” she said.

Amid calls to improve the testing system available to lawmakers and Capitol Hill denizens after this week, Pelosi said she has confidence in the recommendations of the Office of the Attending Physician of Congress — noting that the sheer number of people working on the Hill (approximately 20,000 employees of all kinds) would pose a challenge for testing.

“There could be some sampling. Let’s depend on science on how deal with it,” she said.

Sources close to Trump told ABC News the president was having trouble breathing and received supplemental oxygen on Friday at the White House after his oxygen levels dropped. This in part prompted the president to be transferred to Walter Reed Hospital late Friday afternoon.

When asked why that information was not disclosed until Sunday, Conley said he was “trying to reflect the — the upbeat attitude that the team, the president, that this course of illness has had.”

“I didn’t want to give any information that might steer the course of illness in another direction. And in doing so, you know, it came off that we were trying to hide something which wasn’t necessarily true.”

Conley was asked if Trump had been given a second round of supplmental oxygen on Saturday and he said he’d “have to check with the nursing staff” but if additional oxygen was administered, it would have been “very, very limited.”

Doctors asked about Trump not wearing a mask in videos

Dr. Sean Conley and the medical team were asked about videos that showed President Trump not wearing a mask while updating the public on his current condition.

Conley told reporters on Sunday that the president “wears a mask anytime he’s around us” and that all hospital officials are wearing their N95 masks and full personal protective equipment.

Doctors hope to discharge Trump as early as Monday

Dr. Garibaldi, part of the medical team treating President Trump, said if the president continues to look and feel as well as he does Sunday, the hope is he can be discharged as early as Monday to return to the White House where he can continue his treatment.

Trump has had no fever since Friday morning

Trump’s medical team said the president has remained without a fever since Friday morning and his vital signs are stable. He is not complaining of any shortness of breath or other significant respiratory symptoms.

Trump is walking around the White House medical unit at Walter Reed without any limitation or disability.

Trump’s oxygen levels have dropped twice since onset of symptoms

Dr. Conley said over the course of exhibiting coronavirus symptoms, President Trump has experienced two episodes of “transient drops” in his oxygen saturation.

The medical team decided to administer the steroid dexamethasone based on the timeline from the initial diagnosis and concerns over “possible rapid progression of the illness.”

“Thursday night into Friday morning when I left the bedside the president was doing well, with only mild symptoms and his oxygen was in the high 90s,” Conley said. “Late Friday morning, when I returned to the bedside, the president had a high fever and his oxygen saturation was transiently dipping below 94%. Given these two developments, I was concerned for possible rapid progression of the illness.”

President Trump’s condition has continued to improve, physician to the president Dr. Sean Conley told reporters on Sunday. He has not had a fever since Friday morning and is not complaining of shortness of breath.

Rudy Giuliani said on Fox News on Sunday morning that he held about a 35 to 40 minute phone conversation with Trump on Saturday where they went over his health and the campaign.

“I had to kind of get him off the phone so he went back and rested,” Guiliani said in the interview.

Giuliani says the president told him that he “felt pretty bad the first day”, but, as of 3 p.m. on Saturday that he “felt perfectly fine”, had no fever and was a little tired.

Giuliani also commented on his own personal health and said he got tested two days ago and will be tested again “probably tomorrow.”

Giuliani said he tested negative and currently has no symptoms of COVID-19.

Nick Luna, the current director of Oval Office Operations and bodyman to President Trump has tested positive for the coronavirus, sources familiar with the matter confirmed to ABC News tonight.

Luna travels with the president pretty much wherever he goes and sources with direct knowledge tell ABC News that Luna was with Trump on most of his travels this week, including most recently a trip with the president and Hope Hicks, who later tested positive for COVID, on Wednesday. He did not travel to Trump’s fundraiser in Bedminster, New Jersey, on Thursday.

Luna’s positive test could have other implications: He is married to another White House aide who happens to be an assistant to Jared Kushner, the president’s senior advisor and son-in-law.