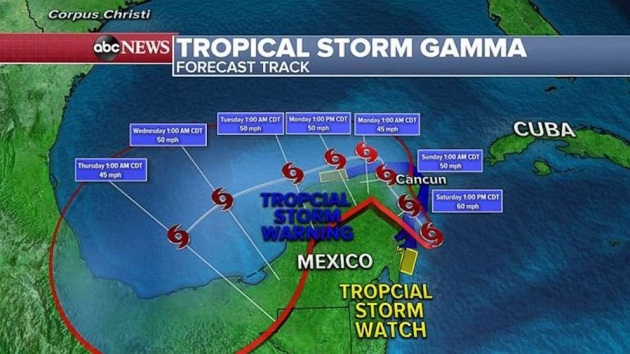 (NEW YORK) — Gamma made landfall near Tulum, Mexico around 11:45 a.m. CT as a strong tropical storm with maximum sustained winds near 70 mph.

The storm is now moving inland over the northeastern Yucatan Peninsula bringing heavy rain and strong winds to the area. Hurricane and tropical storm warnings remain in effect along parts of the Peninsula this afternoon. Locally 6 to 12 inches or more of rain is expected and this could trigger dangerous flash flooding and mudslides.

The main threat right now for Gamma in Mexico will be the 15 inches of rain that will be possible in some areas, which could produce life-threatening flash flooding near where the storm makes landfall. A separate area of heavy rain, far away from the center of Gamma, could bring up to 20 inches of rain over the Mexican states of Campeche, Tabasco and Chiapas. This could produce major flash flooding and mudslides.

After impacting the Yucatan Peninsula, Gamma will emerge in the Gulf of Mexico. However, steering currents will become quite weak and it does not appear Gamma will have much opportunity to strengthen as it meanders for the better part of the upcoming week. Another Tropical system will try to sneak in behind Gamma, likely reaching the Gulf of Mexico by the middle of next week.

It remains unclear how some of this will play out, including whether this second tropical disturbance will have any opportunity for strengthening and how it steers through the Gulf of Mexico. Currently, the system has a 40% chance of development in the next five days. It’s too early to tell whether any of this tropical activity is a threat to the U.S.

In California, there were a couple of new daily record high temperatures on Friday, including Escondido, which hit 105 degrees, Palmdale, which hit 101 degrees and Sandberg, which hit 93 degrees. Anaheim tied its record of 101 degrees. In Arizona, Tucson hit 103 degrees, which tied its all-time October record that was previously set just this past Thursday.

There will be a brief period of elevated fire conditions due to gusty, dry winds Saturday morning in parts of Southern California. It will also be another hot day across California and the desert southwest, where temperature records will be possible again.

However, there is some good news for the western U.S., which has been plagued by record heat and dry weather. A major pattern change is in sight for the region in the upcoming week.

Temperatures will drop some 10 to15 degrees over the course of the upcoming week, from the 90s down into the 80s and even 70s. This is quite a welcome relief for the region. It even looks like some beneficial rain will arrive in Northern California by next weekend.

Rudy Giuliani suspended from practice of law in New York
Jennifer Aniston says she’s “in a really peaceful place”
Don Cheadle shares “the fun” in being a part of Steven Soderbergh’s twisty noir crime drama ‘No Sudden Move’
Officer in critical condition after being shot in the head, manhunt on for suspect
Mom who gave birth as college athlete competes in US Olympic track and field trials
Supreme Court sides with California farms in case involving labor union access