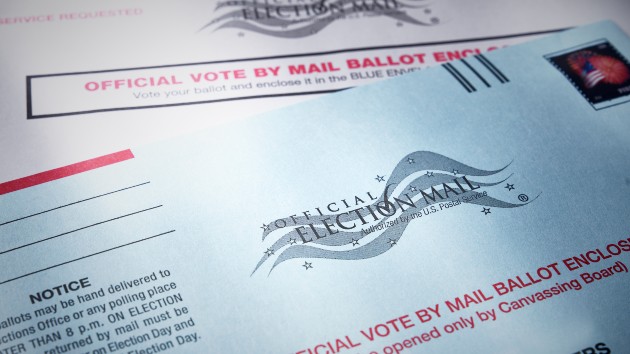 (WASHINGTON) — No absentee ballots in the key battleground state of Wisconsin were found in rivers last week, and though local authorities reported some absentee ballots were temporarily lost in a batch of mail found on the side of the road near Appleton, Wisconsin, none of the ballots were from the state, the Wisconsin Elections Commission said on Thursday.

Unanswered questions about what happened to the batch of mail found in eastern Wisconsin are likely to be addressed by an ongoing Postal Service investigation, but the incident has come under intense and perhaps premature scrutiny because of unsubstantiated claims the president made during the first presidential debate on Tuesday, when he said that mail-in ballots were being “dumped in rivers.”

“Did you see what’s going on?” President Donald Trump said onstage. “They are being dumped in rivers. This is a horrible thing for our country.”

“There is no evidence of that,” responded Democratic nominee Joe Biden.

White House press secretary Kayleigh McEnany later made it clear that Trump was talking about the investigation in Wisconsin.

McEnany was repeatedly pressed by a reporter on Thursday to clarify where the “river” that Trump talked about was located, but she declined to answer.

“You’re missing the forest through the trees here,” she responded to the reporter.

The lost mail in Wisconsin was actually found on the side of a road and in a ditch line in Greenville, Wisconsin, a small town of about 12,000 people outside the city of Appleton. The mail was supposed to be in transit to the post office, according to the Outagamie County Sheriff’s office. “Several” absentee ballots were found among three “trays” of mail, according to the sheriff’s office.

Outagamie County Sheriff’s Office Lt. Ryan Carpenter described each “tray” as about 18-inches high with an estimated few hundred pieces of mail. Officers who reported to the scene didn’t count how many absentee ballots were in the mix, Carpenter said.

The U.S. Postal Service, which is in charge of the investigation going forward, declined to comment, but Wisconsin Elections Commission administrator Meagan Wolfe announced on Thursday that she’d been informed by post office officials that no Wisconsin ballots were among the lost mail.

Wolfe said she was not informed what state the ballots were from.

“But if there were ever an issue with Wisconsin ballot, it’s a very intentional, deliberate process with many safeguards in place, where we would be able to identify issues,” Wolfe added.

Wisconsin began sending out absentee ballots to voters on Sept. 17. The state is a vital win for either candidate in the path to victory this November.

Greenville town clerk Wendy Helgeson said she hopes USPS investigators can offer clear information to the public sooner rather than later, so as not to undermine the integrity of the process.

“If there’s one thing that I would hope that people know about our state is that there’s a huge amount of integrity in the job that we do, and people take a lot of pride in it, nobody wants to be in the newspaper,” Helgeson said.

Trump’s claims about fraud in the mail-in ballot process have grown as the country nears Election Day, which is about a month away, but there is no evidence that voter fraud will increase as mail-in voting becomes a more popular choice due to the pandemic.

Election officials in Democrat and Republican states alike have been clear that they have confidence in their election process, and experts agree that the risk of fraud is very low.

“There is no evidence that widespread or systematic absentee voter fraud is a real phenomenon. There have been scattered instances of both in-person and absentee voter fraud throughout history. But that’s something that both Democratic and Republican campaigns have engaged in. And there is just no evidence that it happens on a widespread or systematic basis,” said Kate Shaw, a law professor at Cardozo Law School and ABC News legal contributor.

And for voters both in Wisconsin and across the country who don’t want to rely on the mail to vote this year, there are other ways to safely cast a ballot without increasing the risk of contracting coronavirus. In many states, early voting or absentee in-person voting is an option, which allows voters to cast their ballots in person ahead of Election Day. There are also drop boxes, where voters can drop their absentee ballots off directly with their election clerks instead of sending it through the mail.

In Wisconsin, voters have already started receiving and returning absentee ballots at a rate that far surpasses what was seen in 2016: 1.2 million absentee ballots have been requested as of Oct. 1, per the Wisconsin Elections Commission, which is 16 times more ballots than were requested by this time last year. Already, 395,000 ballots have been returned, which is seven times more than the same time last year.

The deadline to request an absentee ballot in Wisconsin is Oct. 29, but voters should give themselves at least a week before the Nov. 3 deadline to return it by mail. Voters can also submit their ballots to a dropbox, vote absentee in-person with their ballot at a clerk’s office beginning on Oct. 20, or vote in person on Election Day.

No matter how Wisconsin voters choose to cast their absentee ballots, they can track their ballots online through the whole process. Each Wisconsin absentee ballot has an intelligent barcode, so its movements can be tracked much like an Amazon package.