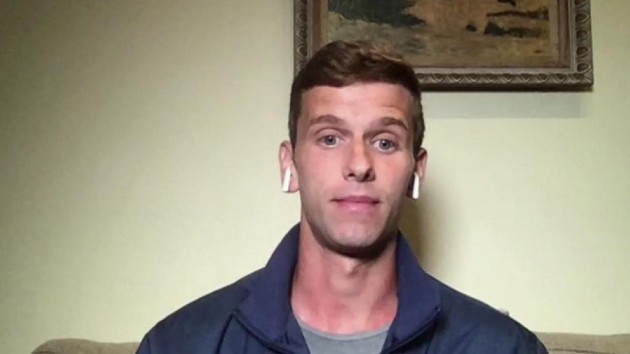 (NEW YORK) — U.S. soccer legend and current USL manager Landon Donovan took his team name to heart on Wednesday when he stood firm to back one of his players after an alleged anti-gay remark was made during the match.

The San Diego Loyal coach ultimately pulled his team from the pitch mid-match while leading 3-1 against the Phoenix Rising and forfeited after one of Rick Schantz’s players allegedly used a homophobic slur directed at openly gay midfielder Collin Martin.

“I was pretty shocked. It obviously was an exchange that first started with some bad language,” Martin told ABC News’ Good Morning America on Friday. “That’s normal. It happens. But it escalated to a place where it crossed the line and I’m just at a point where in my career I’m an out gay player and I can’t stand for having a homophobic slur said to me during a game.”

He continued, “It was pretty upsetting and honestly it took me a little bit to totally soak in what was said to me, but I’m honestly proud of myself for bringing it to the ref and not standing for it.”

Near the end of the first-half stoppage time, referee Joseph Salinas whistled the play dead and mistakenly gave the Loyal midfielder a red card that ejected him from the match.

His teammates swarmed the ref and insisted that the wrong player was being penalized, followed by Donovan who approached the ref on the pitch to get an answer.

Donovan then came face-to-face with Schantz over the incident and in their exchange called out the comment, saying it was “homophobia.”

“I give Collin tremendous credit because — in the heat of battle you want to play and compete and when you’re beating a rival, really badly, you just want to finish the game and win the game,” Donovan said. “But Collin, to his immense credit, said something, he acted and he spoke and we just decided that if that player was not going to be removed from the game either through a red card by the referee or from the other team subbing him off the field, that we had to act and so I give our team a ton of credit for taking that stance.”

The Loyal coach explained further that “the context matters quite a bit” because just one week prior the team had experienced another upsetting slur.

“A player on our team, Elijah Martin, was exposed to a racial slur and we went back and forth all week on whether we should even play this next game because we were pretty upset about it and we were also upset we didn’t say anything during the game,” Donovan explained. “And of course, the next week this happens.”

Schantz denied that he was downplaying the alleged slur and claimed he was only asking about Donovan’s reaction.

Despite what was on the line, the team fully supported Martin and forfeited the match leading into the USL playoffs.

“Landon was pretty adamant right away that he wanted us off the field,” Martin said. “We took the time at halftime to hear everything that happened and to see what the team wanted to move forward with and they were all adamant that we weren’t going to play. So I was pretty uncomfortable by it, to be honest. It was a big game for the team and we were winning and I thought let’s just finish the game. Let’s beat them and move on with it. But I mean they weren’t having it.”

Donovan recalled that when he was a player in the early 2000s “gay slurs were used quite often and it was almost like a normal thing and people said it quite often until a stand was finally taken and people just didn’t accept it anymore.”

“It’s not something we hear every week and there’s not bigotry or homophobia expressed every week, but like I said, I think the world was trying to tell us something and it’s still clearly around and we just have to get it out of our game,” he said. “It cannot be in any sports environment. It can’t be in our society and unfortunately, the only way that change happens is by doing something drastic.”

Junior Flemmings, the Rising midfielder accused of making the offensive comment, denied that the incident happened.

“At no point did I say a homophobic slur towards Collin Martin. I stand in solidarity with the LGBTQ+ movement,” he wrote on Twitter.

Flemmings and the Phoenix Rising head coach have been put on administrative leave.

Ryan Madden, vice president of communications and public relations for the USL, said in a statement: “Foul and abusive language of any type has absolutely no place in our society and will not be tolerated in USL matches.”

“In addition to implementing comprehensive training and education, the USL will get to work immediately – alongside the Player’s Association and the Black Players Alliance – to put even more severe repercussions in place going forward. This has to stop. It simply won’t be allowed to occur,” he continued.

A conclusion is expected to be reached in the ongoing investigation before the weekend.

The league also announced that every USL owner, executive, player and staff member will undergo comprehensive sensitivity training ahead of the 2021 season.

Black Friday 2020: Tips on the best deals to look out for
Coronavirus live updates: US reports over 110,000 new cases on Thanksgiving
George Floyd’s brothers on the fight for justice, remembering him on Thanksgiving
Shop Small Saturday: support our local businesses during a difficult year
Anticipating a vaccine, supply chain preps for challenges ahead
Denver mayor offers apology for Thanksgiving travel after urging residents to stay home