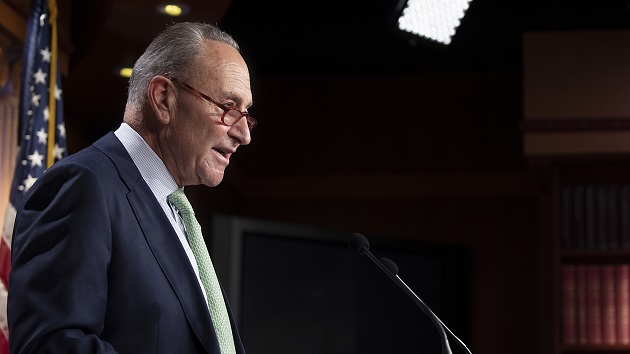 (WASHINGTON) — Senate Minority Leader Chuck Schumer on Friday called for Supreme Court nominee Amy Coney Barrett, and anyone she was in contact with, to self-isolate after potential exposure to coronavirus at the White House, a move that could derail GOP efforts to hold quick confirmation hearings and a final vote before the November election.

“The infection of the President, First Lady and a close aide require that the White House immediately conduct a contact tracing regime that follows CDC guidelines, as well as thorough testing and isolation for those who were exposed to infection risk,” Schumer said in a statement. “That includes Judge Amy Coney Barrett and anyone she was in contact with.”

Before Friday’s news, Democrats have vowed to use all procedural tools available to slow the confirmation process, insisting whoever is elected as the next president should decide on a nominee.

Barrett, who wore a mask greeting senators with elbow bumps but later removed it while keeping social distance, has recently tested negative for COVID-19 and is tested daily, according to the White House.

The Washington Post reported that Barrett has had COVID-19 and since recovered from it.

One Republican she met with, Sen. Mike Lee of Utah, who sits on the Senate Judiciary Committee, said he had tested positive and would quarantine. Lee was at the White House on Saturday for Trump’s announcement of Barrett’s nomination and met with her on Tuesday on Capitol Hill.

Nevertheless, Republicans made a point of saying Barrett’s hearing would go on as scheduled.

“Talked to Senator Lee earlier today and wished him a speedy recovery. Look forward to welcoming him back to the @senjudiciary to proceed with the nomination of Judge Amy Coney Barrett on October 12,” Graham tweeted.

Schumer and Sen. Dianne Feinstein, the top Democrat on the Judiciary Committee challenged Graham committing to the Oct. 12 date for hearings, which should not be done virtually.

“It is premature for Chairman Graham to commit to a hearing schedule when we do not know the full extent of potential exposure stemming from the president’s infection and before the White House puts in place a contact tracing plan to prevent further spread of the disease,” they wrote in a statement.

“The unfortunate news about the infection of our colleague Senator Mike Lee makes even more clear that health and safety must guide the schedule for all Senate activities, including hearings,” they said. “It’s critical that Chairman Graham put the health of senators, the nominee, and staff first – and ensure a full and fair hearing that is not rushed, not truncated, and not virtual. Otherwise this already illegitimate process will become a dangerous one.”

Senate Majority Leader Mitch McConnell conceded on Hugh Hewitt’s radio show Friday morning that moving forward on the timeline will require “all hands on deck” from his GOP conference. He called COVID-19 the “biggest enemy” standing in the way of Barrett’s confirmation.

“I think every precaution needs to be taken because we don’t anticipate any Democratic support at all either in committee or in the full Senate,” McConnell said. “And therefore everybody needs to be in an all hands on deck mindset.”

GOP Sens. Lisa Murkowski of Alaska and Susan Collins of Maine have already indicated they will not support moving forward with a nominee before Election Day. That means McConnell can afford to lose only two additional GOP senators and still get Barrett’s nomination through the Senate. If some members are quarantined and unable to vote, it could stall or upend that plan.

Still, McConnell tweeted that he had spoken with President Trump Friday and that the two discussed moving “Full steam ahead with the fair, thorough, timely process that the nominee, the Court, & the country deserve.”

On Tuesday, Wednesday and Thursday of this week, Barrett was escorted from the White House via a presidential motorcade to Capitol Hill, where she met with senators while flanked by members of the president’s team, including Chief of Staff Mark Meadows and White House Counsel Pat Cipillone.

Rather than the usual procedure, which would have involved Barrett going to senators’ offices, she remained in one room with senators coming to greet her.

The room had high ceilings and spaced-out seating. But as senators posed for photos with the judge, some got near her. While mask guidelines were mostly adhered to, Barrett did not have a mask on while photos were snapped with each senator, and neither did most of the senators.