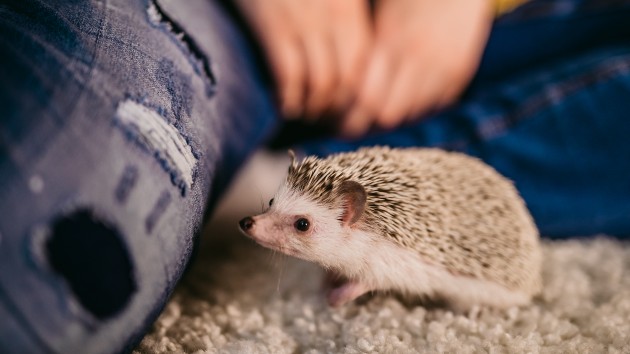 (NEW YORK) — Two salmonella outbreaks affecting dozens of people in multiple states have been linked to pet hedgehogs and bearded dragons, the Centers for Disease and Control and Prevention said this week.

The CDC is investigating an outbreak of the strain Salmonella Typhimurium, with 32 infections in 17 states tied to contact with pet hedgehogs as of Sept. 22.

Five people have been hospitalized. No deaths have been reported. Sixteen of 23 ill people interviewed reported contact with a hedgehog before becoming sick, the CDC said.

The CDC also is investigating an outbreak of the strain Salmonella Muenster, in which there have been 13 infections in eight states tied to contact with pet bearded dragons.

Seven people have been hospitalized, and no deaths have been reported. Five of those ill are younger than 5, while 10 of 13 people reported contact with a bearded dragon before getting sick, the CDC said.

The CDC did not identify all of the states in the outbreaks, though it said that samples from a hedgehog in New York contained the strain that was making people sick.

Those affected reported buying bearded dragons and hedgehogs from various suppliers, and a common source has not been identified for either pet, the CDC said.

The CDC advises to always wash your hands thoroughly with soap and water after handling a pet or anything in its environment, especially small mammals and reptiles that are known to spread salmonella to humans. It also recommends not kissing or having your pet in areas where you eat, store or prepare food.

Bearded dragons and hedgehogs are some of the most popular pets sold at NJ Exotic Pets in Lodi, New Jersey. Sales associate Skylynn Lyons told ABC News it can be possible for people to get a salmonella infection after coming into contact with either animal’s feces while handling them. It may be more common with hedgehogs, which run on wheels for several hours a day and often defecate while using them, and which are more prone to humans handling.

“The more you interact with them, the friendlier they become,” said Lyons, who has had hedgehogs and currently has two bearded dragons. “It’s about creating that bond, but at the same time you do have to protect yourself.”

The store recommends washing your hands after handling the pets and cleaning hedgehog wheels each morning.

Common symptoms of salmonella infection include diarrhea, fever and stomach cramps anywhere from six hours to six days after exposure. The illness can last up to a week. Most people do not need treatment, though children under 5, adults 65 and older and those with weakened immune systems are more likely to have a severe case.

Last year, a salmonella outbreak in 14 states was linked to pet turtles. There were 26 reported cases, resulting in eight hospitalizations and no deaths.

Georgia to begin Trump campaign-requested recount of presidential contest Tuesday
Color changes in fingers, toes may be first sign of Raynaud’s syndrome
Storm in Central US to bring snow to parts of Midwest
Boy, 11, arrested after multiple fires set at neighborhood home with people inside
Purdue Pharma expected to plead guilty to charges related to nation’s opioid crisis
Black-owned brands to support and shop for on Black Friday and beyond