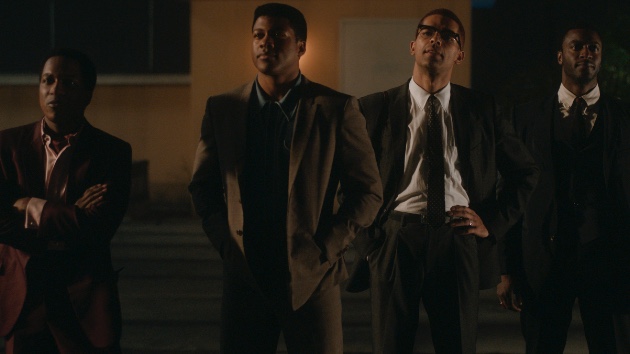 One Night in Miami, written by Olivier Award-nominated Kemp Powers, is set to hit select theaters on December 25, 2020, followed by a global launch on January 15, 2021 exclusively on Prime Video.

This marks the Oscar-winning actress’ first feature film in the director’s seat.

“To complete and release a film within the same year is a difficult task,” King said in a statement. “We welcomed the challenge because we knew now was the time for this film to be released. Amazon fully supported our intention and I could not be more excited this prescient story will be seen across the globe.”

Based on Powers’ 2013 stage play, One Night in Miami spotlights some real-life civil rights icons and celebrities during the Jim Crow-era, with Aldis Hodge starring as Jim Brown, Leslie Odom, Jr. as Sam Cooke, Kingsley Ben-Adir as Malcolm X, and Eli Goree as Muhammad Ali.

The film follows young Cassius Clay, before he became Ali, after his victory at the Miami Beach Convention Center against Sonny Liston in 1964.

While crowds flooded the streets to celebrate Clay’s title as the World Heavyweight Boxing Champion, he himself was unable to stay on the island due to the segregation laws of the time. Instead, he spent the night celebrating with his three friends at the Hampton House Motel, located in one of Miami’s historically black neighborhoods.

One Night in Miami will also feature the original song “Speak Now,” co-written by Odom Jr.