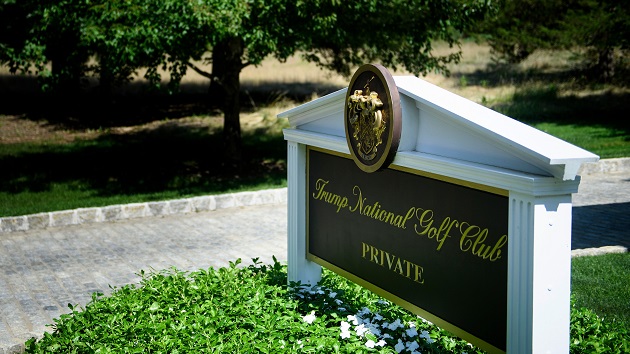 (BEDMINSTER, N.J.) — The guests arrived for President Donald Trump’s high-dollar fundraiser at the Trump National Golf Club Bedminster, New Jersey, on Thursday afternoon in motor coaches and were ushered into a large, open courtyard for a buffet lunch and pumpkin cheesecake.

Golfers participating in a club invitational peered in from nearby, and the growing crowd bristled with excitement as Marine One swept in with the guest of honor.

The roughly 100 campaign supporters who paid up to $250,000 to attend had no idea that the president had recently been exposed to the novel coronavirus and would soon test positive. One day later, New Jersey health officials are trying to locate those who attended in case anyone shook hands or snapped photos with Trump.

“He made some jokes, he looked fine, he was happy, he was laughing, he was funny,” said Katherine Hermes, a member of the club who paid $2,600 for a ticket and went with her husband. “I was flabbergasted when I woke up this morning. He looked perfectly healthy.”

There are differing accounts of how much effort the president made to keep his distance from guests. ABC News spoke with more than half a dozen people who attended the event. Most said the president kept people at bay. White House press secretary Kayleigh McEnany told reporters the president “socially distanced, it was an outdoor event and it was deemed safe by a White House operations for him to attend that event.”

Spenser Sembrat, the founder of a travel business, told ABC News that when the president addressed the group, they all sat at tables separated by at least 6 feet.

“It was a buffet style, but from what I could tell everyone was wearing masks,” he said.

“During the fundraiser, during my time at the club, no attendees were allowed within 6 feet of the president,” Bartek said, recalling a “big, well-controlled crowd.”

Prior to the main event, Trump participated in an event with a much smaller group and a looser environment. Dr. Rich Roberts said in a video posted on the website The Lakewood Scoop that he attended the event and was part of the “small group” of roughly 20 donors that participated in a roundtable discussion on Iran, China, debate strategy and other topics. It was held at a rectangular table.

“Here was President Trump, and I was directly across from him, over one seat, and then it went out from there,” Roberts said, adding that the president appeared in “top spirits” and “full of fight and energy.”

Bedminster is a place where Trump has historically been comfortable letting his guard down. It was in one of the suburban New Jersey golf club’s gilded ballrooms back in August that dozens of club members toting wine glasses were treated to an impromptu press conference. Almost none of them wore masks.

“The pandemic is disappearing,” Trump told the members. “It’s going to disappear.”

That appeared to be the mood ahead of the fundraising event, according to one club member who saw donors arriving, but did not stay to see the president. Speaking on the condition he not be named, the golfer said Trump enjoys mingling with members and many of them consider those interactions a major perk of the club.

Campaign officials would not say if the 6-foot distance was maintained for those 40 to 50 guests who later met the president inside the clubhouse for a photo — an honor reserved for couples willing to pay $50,000.

“I wasn’t able to get a picture with him,” Sembrat said. “I assume they were taking pictures inside the clubhouse, but I’m not positive.”

On Friday, Somerset County, New Jersey, health officials reached out to Trump campaign officials to seek the names of those who attended. Nathan Rudy, a spokesman for the county, said officials had begun a contact tracing investigation “to determine the potential risk of exposure to attendees and staff at the facility to COVID-19.”

The campaign contacted guests Friday to alert them that the president had contracted the virus.

“Out of an abundance of caution, we want to call this to your attention,” the notice said. “Please contact your medical provider if you or any of your loved ones is ill or develops a fever, shortness of breath, or other respiratory symptoms.”

“The Trump campaign, RNC, and Trump Victory are committed to doing all we can to protect the health, safety, and security of the President’s great supporters and all Americans,” it said.

Hermes called the event “charming” and said no one she saw came close to Trump. She said she does not plan to get tested.