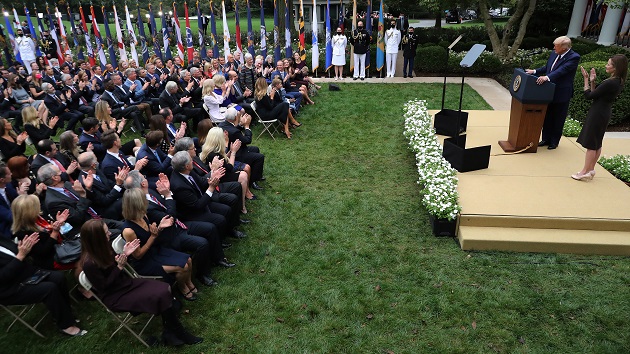 Many of those guests were seen not wearing masks, fist bumping and greeting one another in close proximity, and their seats didn’t appear to be 6 feet apart.

Lee said he took a test only a few days ago “while visiting the White House,” which came back negative. He said he will “remain isolated for the next 10 days” and “will be back to work in time” to pursue Barrett’s nomination.

Prior to her judgeship, Barrett made a name for herself at Notre Dame Law School, also her alma mater. During her 2017 confirmation process, her Notre Dame Law colleagues penned a glowing – and unanimous – endorsement letter.

University of Notre Dame President Rev. John Jenkins was also at the Rose Garden event and also announced Friday he had tested positive for the virus.

In a statement from the university’s vice president, Paul J, Browne, he said Jenkins “learned that a colleague with whom he has been in regular contact tested positive for COVID-19. … As a result, he is entering an extended period of isolation as indicated by University medical personnel and county health officials.”

“My symptoms are mild and I will continue work from home,” Jenkins said in the statement. “The positive test is a good reminder for me and perhaps for all of how vigilant we need to be.”

Attorney General William Barr also was at the event and seen without a mask, but a Department of Justice spokesperson said he tested negative on Friday.

Editor’s note: An earlier version of this story said Hope Hicks was at the Rose Garden event. She was not.