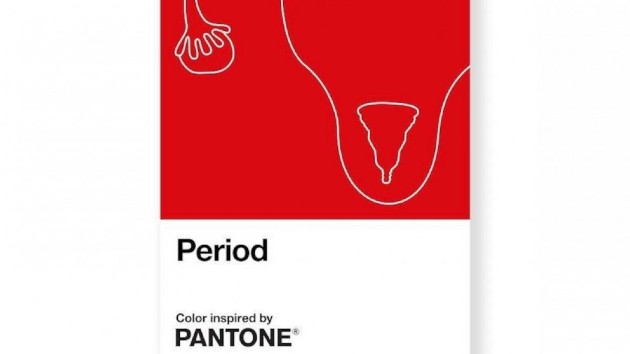 (NEW YORK) — Pantone has launched a new color inspired by the steady flow of menstruation.

“It may be the 21st century but attitudes towards menstruation are stuck in the past, with periods seen in some quarters as mysterious, shameful and taboo – something that should be hidden away and not discussed, or even made the butt of jokes,” according to a statement from the Pantone Color Institute.

The new shade was created in collaboration with Swedish feminine health brand INTIMINA as part of its “Seen+Heard” campaign, which is designed to “empower everyone, regardless of gender, to feel comfortable to talk freely and proudly about periods, to start conversations and encourage a more sympathetic and accurate depiction of menstruation in culture.”

“Pantone’s ‘Period’ red shade represents exactly what our Seen+Heard campaign is about: making periods visible, encouraging positive conversations and normalising menstruation in our culture, our society and in our everyday lives,” Intimina Global Brand Manager Danela Žagar said in a statement.

This is not the first time Pantone has created a shade that sends a message.

Pantone Color Institute is known for identifying color trends that are popular in the cultural zeitgeist, as seen by its ever-popular “Color of the Year” announcements.

When announcing its 2016 Color(s) of the Year — a combination of Rose Quartz, a light pink, and Serenity, a light blue — the company credited “societal movements toward gender equality and fluidity” and “a generation that has less concern about being typecast or judged” behind the color choice.

Although “Period” is not Pantone’s Color of the Year — that spot went to “Classic Blue” — the company made sure the reason, and timing, behind the red shade’s launch was well known.

“Defining and creating a unique red shade symbolic of a steady menstrual flow sends a positive message, encouraging and emboldening all those who menstruate to stand up and be proud of this natural bodily function,” Laurie Pressman, vice president, Pantone Color Institute, said, adding that they chose to launch the color now because “we feel the timing couldn’t be more present or impactful.”