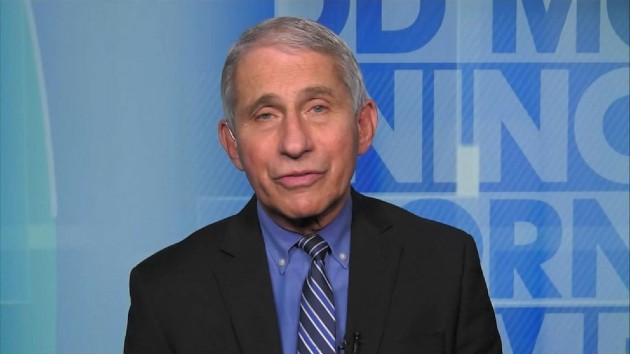 (WASHINGTON) — It may surprise you, but President Donald Trump and Dr. Anthony Fauci have a few things in common: they’re both in their 70s, both hail from the outer boroughs of New York City, and their blunt personalities have both played a major role in their careers.

It was Fauci’s public role on Trump’s Coronavirus Task Force that placed him squarely in front of the worst pandemic the United States has seen in generations. For some, Fauci became a pop icon and a force for truth and science in the face of disinformation. For others, he is unreliable; a political schemer seeking to undermine Trump and spread fear about COVID-19.

Journalist Michael Specter examines Fauci’s career and the challenges of facing COVID-19 with Trump’s White House in his new audiobook Fauci, the first biography to be published on the doctor. Specter writes that he first met Fauci in 1986. Even then, Fauci was a mainstay in both the political and medical communities. He has since served with every U.S. president since Ronald Reagan.

Fauci is now 79 years old and has run the National Institute of Allergy and Infectious Diseases (NIAID) for 36 years. Aside from this year’s pandemic, he also led the efforts against the HIV/AIDS epidemic; the SARS, bird and swine flu outbreaks; and the Zika and Ebola virus outbreaks.

It has been entirely another beast to bridge the worlds of medical research and politics, as Fauci has done now through six presidential administrations. The doctor gave some insight into how exactly he does it when Specter interviewed him in 2016 at the 50-year reunion celebration at his alma mater, Weill Cornell Medical School.

“What I’ve learned to do over the years is to go to my favorite book of philosophy, The Godfather, and say, ‘It’s nothing personal, it’s strictly business,’” Fauci said. “That’s just how I look at it. You just have a job to do. Even when somebody’s acting ridiculous, you can’t chide them for it, you’ve got to deal with them, because if you don’t deal with them then you’re out of the picture.”

Fauci has certainly taken that philosphy seriously while serving under Trump — unafraid to speak up and counter falsehoods while making sure he’s in the room where important decisions are made.

The book also examines the doctor’s extensive career. He faced vitriol during the HIV/AIDS crisis but eventually won over his critics and was able to treat the epidemic with the seriousness it deserved. It also covers how his decades of work has prepared him for a pandemic of this scale.

Omari Hardwick and Loretta Devine agree that laughter was their best medicine in their new horror film ‘Spell’
Freeform announces its annual 25 Days of Christmas event
Coronavirus live updates: Vaccine effectiveness will be known by December, Fauci says
Mariska Hargitay brings cookies to New Yorkers waiting in line to vote: “It was the least I could do”
Anne Hathaway reveals how she hid her pregnancy while filming ‘The Witches’
Ellen Pompeo reveals her ‘Grey’s Anatomy’ contract expires this year, casts doubt on show’s future