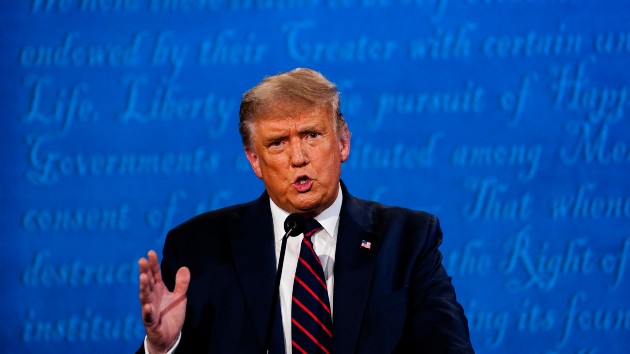 (CLEVELAND) — President Donald Trump was given a chance during the first presidential debate to denounce white supremacists and militias that have been responsible for incidents of violence and death at rallies during the last few months.

Instead, he deflected and told one of those groups to, “stand back and stand by.”

Moderator Chris Wallace brought up the militias and hate groups during the part of the debate focused on “law and order,” and asked the president if he would call on those groups to end their violence. During an Aug. 25 protest in Kenosha, Wisconsin, following the shooting of Jacob Blake, an Illinois teen who was allegedly part of a militia, shot three protesters, killing two, according to police.

Militia groups have also been accused of attacking protesters in Portland, Oregon, over the summer.

Trump repeatedly didn’t answer the question, and contended, with no citation, that the violence came from left-wing groups, but Wallace kept pressing.

“Who would you like me to condemn? Who? Proud Boys, stand back and stand by,” Trump said, referring to the far-right group that has been linked to violent attacks across the country. “Somebody has got to do something about antifa.”

Biden countered that Trump’s own FBI Director Christopher Wray has said that white supremacists are a serious threat and antifa was an idea, not an organization.

During a Sept. 17 hearing before the Homeland Security Committee, Wray testified that “racially motivated violent extremism,” particularly those subscribing to “white supremacist-type ideology” was the “biggest chunk” of the domestic terrorism category.

Southern Poverty Law Center President Margaret Huang tweeted that the president should not ask extremists to “stand by.”

“These are not ‘fine people’ and the Proud Boys should be rejected,” she tweeted.

NAACP President Derrick Johnson also tweeted out his frustration with the president.

“We must never stop being outraged by this,” he tweeted with the hashtag #wearedonedying.

“This. This is Donald Trump’s America,” he tweeted.

Earlier in the debate, the former vice president criticized Trump’s handling of the 2017 unite the right rally, where hundreds of right-wing groups and militias marched through Charlottesville, Virginia, and shouted hateful speeches against Jews and minorities.

Heather Heyer, 32, was killed during those protests when a car driven by one of the right-wing supporters hit her and other counter-protesters.

“They asked the president what he thought. He said, ‘There were very fine people on both sides.’ No president has ever said anything like that,” Biden said.

Trump has repeatedly defended his comments about the rally and shown support for controversial Confederate monuments that have been at the center of some of those rallies.