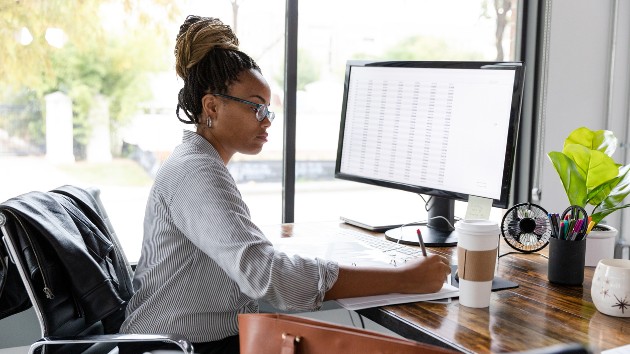 (NEW YORK) — The coronavirus pandemic has the potential to undo years of gains for women in the workplace, according to a massive new study on the state of women in corporate America released on Wednesday.

At least one in four women are considering downshifting their careers or leaving the workforce because of COVID-19, according to the annual Women in the Workplace study from LeanIn.org and consulting firm McKinsey & Company. The study involved 317 companies representing over 12 million employees.

This marks the first time in six years of the annual report that the researchers found evidence of women intending to leave their jobs at higher rates than men. Researchers also warned this exodus could possibly undo all the gains women have made in management and senior leadership roles over those past six years.

“The report is really showing the true scale of the problem of what COVID-19 is doing to women,” co-author Rachel Thomas, LeanIn.org’s co-founder and CEO, told ABC News.

She added the pandemic has the potential to take six years of modest progress and “wipe it out in a single year.”

Among senior-level women who said they are considering stepping out of the workforce or downshifting — working in a reduced capacity — in their careers, almost 3 in 4 of them cited “burnout” as the main reason.

Part of the reason for this burnout, researchers suggested, was also that women with children were three times as likely as fathers to be responsible for a majority of the housework and child care amid the pandemic. These women in senior-level roles were all more likely than other women to be mothers, the study said.

“What we see is that work moved home, and now women are thinking about leaving work,” report co-author Lareina Yee, McKinsey’s chief diversity and inclusion officer, told ABC News. “And we’ve talked for years about the double shifts. And what we are seeing now is a double shift, but an even bigger load.”

Yee noted that working moms are reporting an additional 20 hours of responsibilities at home during the pandemic related to child care and more on top of their traditional 40-hour work week.

“The toll on working moms is a very real toll,” Yee added. “It can be quantified.”

“I think it is important to realize how critically important it is to keep those women leaders,” Thomas said. “It’s not just about the numbers, it’s about the impact that women leaders have on an organization.”

Moreover, mothers were found to be two times as likely as fathers to worry that their performance at work was being judged negatively because of their child care responsibilities during the COVID-19 crisis.

The report also noted a “broken rung” — being passed over for that first promotion from entry-level to management — continues to hold women back at work, a key point highlighted in last year’s data as well.

The study did note some, albeit slow, progress over the past six years. Since the study’s inception in 2015, the share of women in c-suite positions — executive-level jobs like COO or CEO — grew from 17% to 21% in 2020.

Yee noted that with the double whammy of the COVID-19 crisis’ impact on women at work and with the so-called broken rung still being broken, “we’re at risk of losing millions of women in leadership.”

“It really does leave you jaw-dropped in terms of the impact that that could have on the pipeline, and the number of women leaders we have going forward,” Yee said.

Yee recommended that companies be “laser-focused” on addressing the broken-rung issue, noting that most companies “don’t measure what happens in the early stages of the talent pipeline” and calling for more “transparency and accountability for results.”

The latest report also highlighted that Black women feel less supported at work, even in the wake of a so-called racial reckoning taking the private sector by storm in the U.S. following the police killing of George Floyd.

Just over one-fourth of Black women said that their manager has checked in with them in light of the recent racial violence and protests, and Black women were less likely than women overall to say their manager fosters an “inclusive environment.”

The study also found that Black women were two times as likely as women overall to say that the death of a loved one has been one of their biggest challenges during COVID-19, further highlighting the disparate health outcomes among communities of color as the pandemic rages.

“What companies have done is they have been overwhelmingly reactive to what’s happened, whether it be a racial injustice happening outside of their company, whether it be a health crisis,” Yee said.

She said while reaction is the “first step,” now is the time when they need to turn “intent into action.”

“So even if companies don’t have a lot of Black talent, you do have Black women in your workforce,” she said. “Are you doing everything you can to bet on them and help them succeed?”

Yee said she hopes the data is useful for women at all levels of their careers and allows them “to see their stories reflected in the report.”

“With the report in hand, they need to say less,” she added.