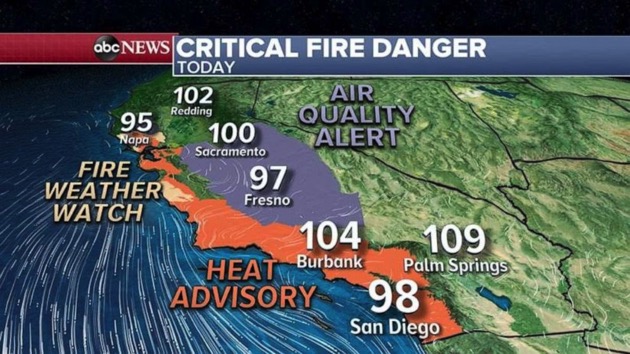 (NEW YORK) — Wildfires continue to burn in California as more gusty winds, and record high temperatures are expected for the West Coast.

Critical fire weather conditions are possible in California in the coming days for the Dolan and Glass Fires, according to the National Weather Service. A fire weather watch has been issued for both blazes.

The Zogg Fire, burning near Shasta County, has grown to 50,102 acres with 0% containment, according to the California Department of Forestry and Fire Protection. The Dolan fire has burned 125,000 acres and is 40% contained.

Meanwhile, the dangerous Glass Incident Fire has nearly quadrupled in size in the last 24 hours, burning more than 42,000 acres in Napa and Sonoma counties. The wildfire has forced at least 68,000 people to evacuate, officials said. So far, according to Cal Fire, the incident has burned 42,360 acres in the North Bay and is 2% contained. At least 113 structures have been destroyed.

Now, attention turns to gusty, dry winds coming to the San Francisco Bay area Wednesday night through Friday afternoon. Wind gusts near 30 mph are expected and a fire weather watch has been issued.

In addition to the wind, a heat advisory has been issued for the Bay area, including San Francisco and also for southern California, including Los Angeles and San Diego. Temperatures could reach 90 to 100 degrees in those cities Wednesday.

On top of the wind and heat, most of northern California is experiencing severe to extreme drought. These dry conditions are helping to fuel the destructive fires.

Unfortunately, there is no relief through Friday for the heat. Temperatures will hover near 100 degrees for most of the area, with Palm Springs forecast to be near 110 degrees for the next three days.

Meanwhile, in the tropics, it looks like a tropical wave in the northern Caribbean is trying to develop into a tropical depression by this weekend.

It is too early to tell exactly where it will go, but some models forecast it for the southern Gulf of Mexico by next week.

Overall, the tropics could come back to life as we head into October, which is the second mini-peak of the Atlantic Hurricane season.