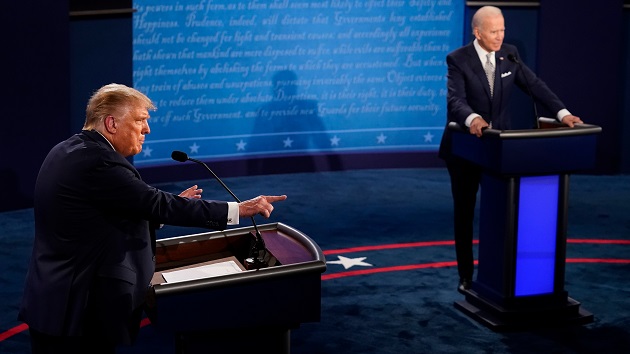 (WASHINGTON) — The Commission on Presidential Debates announced Wednesday that it would consider changes to the remaining debates, citing the need for “structure” after Tuesday night’s often chaotic affair was marked by repeated interruptions.

“Last night’s debate made clear that additional structure should be added to the format of the remaining debates to ensure a more orderly discussion of the issues,” the commission said in a statement.

“The CPD will be carefully considering the changes that it will adopt and will announce those measures shortly,” the statement said. The commission also said it is “grateful” to moderator Chris Wallace “for the professionalism and skill he brought to last night’s debate and intends to ensure that additional tools to maintain order are in place for the remaining debates.”

Both campaigns must agree to the structure of the debates. And while that agreement was settled before the two candidates took the stage Tuesday night, it was not carried out.

The first debate was designed to be in six segments of 15 minutes each, with both President Donald Trump and Democratic nominee Joe Biden having two minutes each to answer a specific question. But the night did not unfold that way, with Trump making constant interruptions, and Wallace, anchor of “Fox News Sunday,” repeatedly asking him to not talk during Biden’s two minutes of answer time.

At one point, when Trump objected, saying Biden was interrupting him as well, Wallace told him, “Frankly, you’ve been doing more interrupting than he has.”

Biden told reporters Wednesday he hoped the commission could figure out a way to have the two men answer without interruptions, even as he blamed Trump for the disorder.

“He not only attacked me constantly, and my family, but he attacked the moderator … I just hope there’s a way in which the debate commission can control the ability of us to answer the question without interruptions. I’m not going to speculate on what happens in the second or third debate. My hope is that they’re able to literally say — the question gets asked to Trump, he has the microphone, he has two minutes to answer the question, no one else has a microphone. And then, I don’t know what the rules are going to be, literally. But that’s what seemed to me to make some sense. But I’m looking. I’m looking forward to that,” Biden said.

“I hope that this next debate is going to be in front of real live people. It’s going to be a town hall. And I just hope we’re able — so I’m looking forward to it,” Biden said. “And I hope we’re able to get a chance to actually answer the questions that are asked by the persons in the room. But God only knows what he’ll do.”

The third and final debate, in Nashville, will be structured the same as Tuesday’s.

Presidential debate live updates: Pleixglass barriers removed from stage
Biden, under pressure on ‘court packing,’ says he would convene commission on reform
Experts call for climate change debate to move beyond settled science and focus on action
‘News of the World’ trailer shows Tom Hanks on an epic adventure
Netflix lifts curtain on dazzling ‘The Prom’ trailer
Biden says he would convene bipartisan commission on court reform if elected