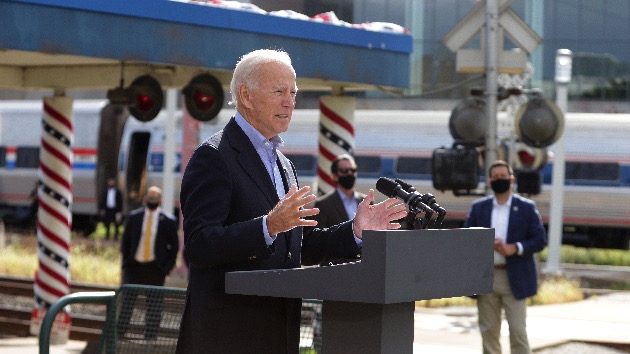 (CLEVELAND) — After a raucous and chaotic first presidential debate, former Vice President Joe Biden is embarking on a roughly 200-mile whistle stop train tour on Wednesday through the battleground states of Ohio and Pennsylvania, pushing his economic agenda while hoping to appeal to voters that have strayed from the Democratic Party in recent years and delivered Donald Trump the White House in 2016.

The Democratic nominee, long-known for his affinity for Amtrak, briefly commented on last night’s debate, his first with President Donald Trump, during the tour’s kickoff event in Cleveland, Ohio.

“Last night’s debate, and this election, it’s supposed to be about…you and all the people I grew up with in Scranton, and people in Youngstown and Claymont, Delaware, and all the people who make a difference,” Biden said standing outside at a socially-distanced event just feet away from his newly-minted campaign train.

Biden also took aim at the president on the issue of taxes, after the New York Times reported Trump paid only $750 dollars in federal taxes in 2016 and 2017.

“He doesn’t pay his fair share in taxes. He says that makes him smart,” Biden said of Trump. “What does that make you…and millions of other hard-working Americans, decent people who pay our taxes? Are we the suckers? Are we stupid because we go by the rules?” Biden said.

At his first stop of the day, Biden did not address the president’s failure to disavow white supremacists in last night’s debate — a moment that has garnered intense attention following the clash between Biden and Trump on stage.

Biden’s one-day train tour will take him across Ohio and Pennsylvania, two states that show the former vice president above 50% in recent state polling. The former vice president will target areas Democrats are hoping to maintain or win back in November, with stops in Alliance, Ohio, and Pittsburgh, Greensburg and Latrobe, Pennsylvania, along with two events in Pennsylvania: one in New Alexandria and at a drive-in in Johnstown.

Stark County, Ohio, the site of the first stop on the tour, backed Barack Obama by over five points in 2008, but sided with Trump by 17 points in 2016. Cambria County, Pennsylvania, where Wednesday’s tour concludes, narrowly backed Obama in 2008 but has swung significantly back to the GOP since then, siding with Trump by roughly 37 points in 2016.

Biden signaled on Wednesday morning that the tour will home in on the economic message he has sought to cultivate in recent weeks, casting the election as a choice between his hometown of Scranton, Pennsylvania, and communities like it across the country, and the monied interests of Park Avenue in New York City.