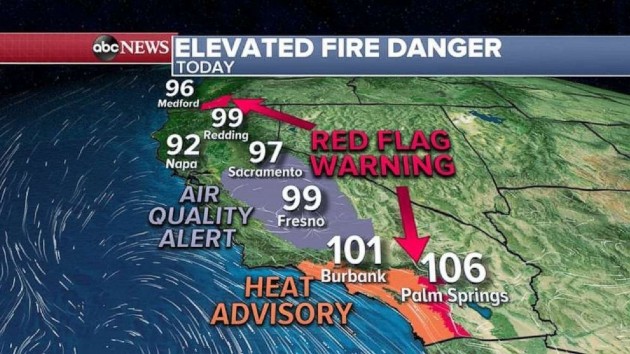 (NEW YORK) — There were 27 large wildfires burning in California on Tuesday after dry brush and windy and hot conditions spread and fueled the flames.

New fires are gaining traction in the state, where more than 3.8 million acres have burned this year.

While gusty winds subsided overnight, temperatures are expected to remain above normal across much of the inland areas in California. Red flag warnings remain in effect for the mountains and inland valleys in Riverside and San Diego counties through Tuesday night.

Some of the worst conditions likely will be in southern California, including Los Angeles and San Diego. Temperatures could top 100 degrees in parts of inland Los Angeles, with coastal areas reaching the 90s. Over the next few days, the heat will continue with temperatures in the 100-degree range from Redding down to Burbank, where some areas could see a few record highs.

More record highs were broken on Monday in the Bay area as Napa reached 103, San Francisco Airport hit 96 and San Jose peaked at 101. Southern California experienced dry and gusty winds in excess of 40 mph on Monday that helped spread some of the new fires.

Elsewhere, a strong cold front is expected to produce some heavy rain with flooding possible for the Northeast on Tuesday night into Wednesday.

Some areas in the Northeast could see more than 3 inches of rain, and if this rain comes down too fast, some minor flooding will be possible in urban areas.

Finally, a possible tropical depression could form in the northern Caribbean by Friday night into Saturday, and, if it becomes a tropical storm, it would be named Gamma.

It’s too early to tell where it will go after this weekend, but some models have it move into the Gulf Coast by next week.