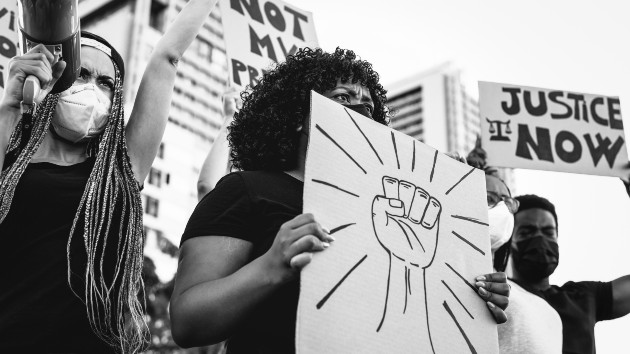 (WASHINGTON) — The killing of George Floyd by Minneapolis police in May and the fury over the police shooting of Breonna Taylor in March set off massive protests across the country against racial injustice and police brutality.

Over the months that followed, new and previous supporters of the Black Lives Matter (BLM) movement held demonstrations from coast to coast and a new generation of Americans protested for racial equality.

Race is now at the center of the national conversation heading into the final weeks of the 2020 campaign for president, from the disproportionate impact the novel coronavirus pandemic has had on communities of color to reforms that would help address racial disparities in policing.

It has also been a complicated issue for both candidates over the course of their long careers. Former Vice President Joe Biden made history by choosing a Black woman, Kamala Harris, to be his running mate and served alongside the nation’s first Black president.

But he has also drawn criticism for his position on busing in the 1970s to help end segregation in schools and the 1994 crime bill, which helped lead to an era of mass incarceration.

Trump set the tone for his presidency when he said Mexico was not sending its best immigrants, including “rapists,” on the day he announced his campaign. That was followed by a call to ban Muslim immigration, his perpetuation of the debunked “birther” conspiracy against President Barack Obama among other things. And he has largely ignored the sources of the racial unrest that has erupted around the country in recent months.

At the same time, Trump has claimed he is the least racist person and touted the economic opportunities he has created for African Americans during his presidency.

Here’s a look at where Trump and Biden differ on the issue of racial justice, and significant statements they’ve made related to race:

Starting before the 2016 election and continuing into his presidency, Trump repeatedly questioned President Barack Obama’s citizenship, amplifying without evidence a racist disinformation campaign designed to call into question the legitimacy of the nation’s first Black president.

In 2015, Trump entered the presidential race saying Mexico was sending crime, drugs and “rapists” to the United States. During his first term in office, Trump continued to seek to strengthen support among segments of his mostly white base by igniting fear of the “other” through policies and rhetoric.

Nationally, roughly 10% of Black voters are planning to support Trump in 2020, according to an analysis of public polling by FiveThirtyEight, similar to the support he received in 2016. Exit polling from 2016 also shows that Trump received more support from Black voters that year than previous GOP presidential nominees Mitt Romney and John McCain.

In 2017, Trump issued an executive order instituting a travel ban from predominantly Muslim countries, a version of which was ultimately upheld by the Supreme Court. Trump implemented his travel restrictions citing national security concerns from “terror-prone countries.”

When later that year, a participant at a white supremacist rally killed a 32-year-old woman when he rammed his car into a group of counter-protesters in Charlottesville, Virginia, Trump drew backlash for claiming there were “very fine people on both sides..” The driver was found guilty of first-degree murder.

In 2018, Trump, who has called himself the least racist person, depicted a migrant caravan as a violent threat to the country and called it an “invasion,” in line with the racist rhetoric he campaigned on in 2016 regarding immigrants.

He’s also targeted the four Congresswomen of color nicknamed “The Squad,” suggesting that Reps. Alexandria Ocasio-Cortez, D-N.Y., Ilhan Omar, D-Minn., Ayanna Pressley, D-Mass. and Rashida Tlaib D-Mich., all “go back” to the countries “from which they came.” Ocasio-Cortez, Pressley and Tlaib were all born in the U.S.; Omar is a Somali-American who immigrated as a refugee and became an American as a teenager.

As the 2020 race heated up, so did the divisive rhetoric.

In 2020, Trump called Black Lives Matter “a symbol of hate” and also stoked racist fears after overturning an Obama-era housing rule intended to fight racial segregation by linking funding to the reduction of housing inequality.

The rhetoric echoed a federal lawsuit from 1973, in which Trump was named with his father, Fred, and accused of discriminating against Black tenants at their housing properties in New York. The parties ultimately reached a settlement without an admission of guilt from the Trumps.

In an attempt to appeal to his base, Trump made a request in September to the Office of Management and Budget to halt anti-racism training in federal workplaces, calling it “anti-American propaganda.” He later signed an executive order expanding the ban to contractors doing business with the federal government. The order prohibits the teaching of “divisive concepts” such as white privilege, which is the analysis of the inherent advantages a white person has in America, and systemic racism, which examines discriminatory rules, practices and customs embedded in law.

Weeks later, Trump contradicted that order with the release of his economic “Platinum Plan” for Black Americans, which includes “diversity training.”

Also in September, Trump delivered a dark and racially divisive speech at the National Archives playing off of the fears and insecurities of supporters who believe calls for racial equality are “attempting to demolish” the “treasured and precious inheritance” of our nation. He gave a warning that the “crusade against American history is toxic propaganda,” referring to critical race theory, the study of society and culture as they relate to race, and The New York Times’ 1619 Project that analyzes U.S. history through the lens of slavery. That day he signed an order to promote “patriotic education.”

In response to a national outcry over killings of unarmed Black people by police, Trump has chosen to brand himself the “law and order” president while avoiding discussions about the root cause of the protests, despite expressing sympathy for the families of some of the people killed. He’s said demonstrators protesting racial injustice are “looking for trouble” and that companies supporting BLM are “weak” and led by “weak people.”

He’s a strict opponent to calls for stripping police departments of funds and called the “defund the police” movement a “fad.”

Trump has refused to acknowledge that systemic racism is a problem in the United States. However, in a departure from his tough-on-crime rhetoric, one of the biggest legislative achievements of Trump’s first term was signing into law the bipartisan ‘First Step Act’ in 2018, which provided the most sweeping changes to prison sentencing laws in decades, and which Trump says will “rollback” certain provisions from President Bill Clinton’s 1994 Crime Bill that disproportionately affected the Black community.

More than 3,100 inmates have been released so far as part of its enactment, including Alice Johnson, a Black grandmother who was serving a life sentence for a non-violent drug arrest and was ultimately pardoned by Trump.

When asked in June how he plans to address systemic racism in the justice system, the president said it will heal itself when the economy is strong again.

“By the way, what’s happened to our country and what you now see, it’s been happening, is the greatest thing that can happen for race relations, for the African American community, the Asian American, the Hispanic American, for women, for everything,” Trump said in June after being asked why he doesn’t have a plan to address systemic racism. “Our country is so strong, and that’s my plan. We’re going to have the strongest economy in the world.”

Joe Biden: Legacy of Black support and some criticism

Biden has strong support from much of the Black community, with his nomination due in large part to his support in South Carolina and his success there boosted by Rep. Jim Clyburn’s endorsement.

But he’s also found himself on the receiving end of criticism from the crucial voting bloc, ranging back to his spearheading of the 1994 crime bill, which led to an increase of mass incarcerations, and most recently in May for saying “you ain’t Black” to African American voters deciding between him and Trump. He also faced backlash for comparing the diversity in African American communities to Latino communities, suggesting the former is a monolith.

During a heated exchange with Harris during a Democratic primary debate, Biden’s record on opposing federally mandated busing drew new attention. In 1977, Biden called it a “bankrupt policy.” At the debate in June, Biden claimed Harris took his record out of context and said he supported voluntary busing.

Biden also drew fire for working with segregationist Democrats while he served in the Senate. He has reiterated that he did not agree with their views and that “there’s not a racist bone in my body.”

Biden’s also expressed regret over the Obama administration’s immigration policy, calling it a “big mistake” to have deported thousands of people with no criminal records.

Unlike his opponent, however, Biden does acknowledge systemic racism and has released the “Biden Plan for strengthening America’s Commitment to Justice,” which focuses on preventing crime, eliminating racial disparities and providing second chances for those who have had contact with the criminal justice system.

Biden’s plan, which was put forward before this year’s protests, calls for an end to private prisons, cash bail and the death penalty and would expand the Justice Department’s purview to address police and prosecutor misconduct. It would also institute an independent task force to tackle discrimination.

He also supports the decriminalization of marijuana and automatically expunging records for those who have been convicted of marijuana-related offenses. Data compiled by the American Civil Liberties Union (ACLU) shows that Black people have been four times more likely than white people to be arrested for marijuana possession.

A pillar of his “Build Back Better” policies focuses on the economy and inclusion, specifically how he would help Black, Latino and disadvantaged communities.

While polling shows Biden with a lead over Trump among Latino voters, Biden’s campaign has acknowledged that it trails the support Hillary Clinton saw in 2016, and it has been criticized for lack of outreach to Latino communities. But the campaign has touted its diverse staff, saying 46%of full-time staff are people of color.

“We know we have work to do and we have said from the beginning,” Biden’s campaign senior adviser Symone Sanders told ABC News Chief Anchor George Stephanopoulos on This Week.

Biden has embraced the concept of “Black Lives Matter” and often talks about disparities in the country, telling ABC’s Robin Roberts that there’s a “fundamental difference” between the two candidates on race.

“The truth is, there’s a fundamental difference between Donald Trump and me on the issue of race across the board,” Biden told Roberts. “This is a man who spent his entire career denigrating African Americans. Denigrating them, continuing to denigrate them. To do nothing but go after race and inflame it. Pour, you know, gasoline on the fire.”

A September 27th ABC News/Washington Post poll of likely voters shows that the equal treatment of racial groups is among the top issues in the 2020 election. When asked who they would trust more to handle that issue, 56% said Biden, while 36% said they would trust Trump.