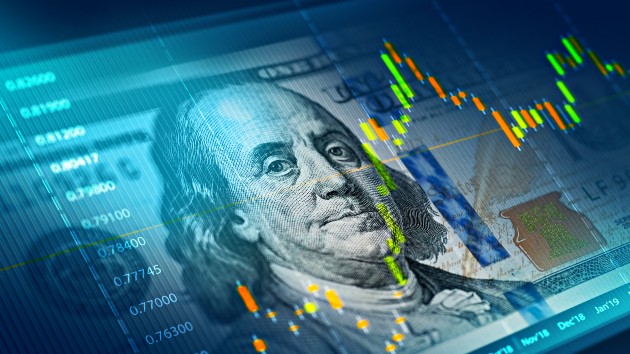 (WASHINGTON) — When President Donald Trump rang in 2020, the economy was one of his biggest selling points for reelection. He had inherited a strong economy from the Obama administration, and it continued to grow stronger during his first term. Unemployment was hovering at a 50-year-low, GDP growth was exceeding expectations and Wall Street was riding the longest bull market in its history.

But by spring, all of that came crashing down. While the economy has begun to shakily recoup some of its losses, a full and speedy recovery is anything but assured, making it a top concern for many Americans. According to a poll from the Kaiser Family Foundation released earlier this month, registered voters ranked the economy as the most important issue in deciding their pick for president, putting it ahead of the ongoing pandemic.

Trump is now trying to convince the country that since he oversaw a robust economy before the outbreak, he’s the best candidate to restore it. His opponent, Joe Biden, argues that Trump’s mishandling of the coronavirus compounded its impact on an economy that was inequitable to begin with and that it should be reimagined rather than rebuilt.

Another wave of coronavirus relief

In the first months of the coronavirus crisis, Trump signed off on roughly $3 trillion in relief funding, but now negotiations for another package to help Americans weather the storm have been at an impasse for weeks — and although White House negotiators and Democratic leaders say they will soon restart talks, the odds of seeing any new aid passed before Election Day seem slim.

Trump finally weighed in earlier this month, urging budget hawk Republicans to back another stimulus bill with “much higher numbers” and signaled openness for a $1.5 trillion proposal put forth by a bipartisan group of lawmakers that calls for between $450 and $600 in enhanced federal unemployment benefits, more support for small businesses as well as state and local governments, and another round of direct payments. However, Democrats are calling for an even higher price tag, so both parties remain at odds.

Trump’s power to push through new measures in a second term depends largely on how the House and Senate swing, but he’s already attempted to swerve legislative gridlock in the past through executive actions — deferring payroll taxes, suspending federal student loan payments through the end of the year and extending unemployment payments at a rolled-back rate.

Economists say these measures have had a limited impact, and more meaningful relief would likely require cooperation with Congress. Trump has said he would take further steps if reelected, like forgiving the deferred payroll taxes, but that plan likely only stands a chance if Republicans control both chambers on Congress in November, and could potentially shortchange Social Security Trust Funds while doing nothing to help the millions who aren’t collecting a paycheck.

Biden has a sweeping plan for a post-pandemic economy but has supplied few details on how he plans to buoy it until the coronavirus is contained — likely in part because Congress could take action before he would take office.

Biden says he would seek to inject up to $2 trillion into the economy in January, following it up with a more comprehensive policy that would come with a price tag around $3 trillion, according to an Axios report. But — like Trump — Biden’s chances of passing ambitious policies depend largely on what party controls the House and Senate.

Biden has previously called on Congress to pass additional expanded unemployment benefits, more funding for nutrition and health programs, as well as more money for state and local governments, echoing the priorities of the House’s $3 trillion Heroes Act passed in May.

With unemployment at 8.4% and likely to take months, if not years, to return to pre-pandemic levels, creating more jobs will be a top priority for whoever sits behind the resolute desk next year.

During his first term, Trump relied on deregulation and lowering corporate taxes to encourage growth. If reelected, he has vowed to go even further — promising to create 10 million new jobs in 10 months during his second term and one million new small businesses, although he has not specifically laid out how he’ll hit those targets.

“We will continue to reduce taxes and regulations at levels not seen before,” he said during the Republican National Convention.

Biden plans to take the opposite approach. He says he will raise taxes on the wealthy and corporations, and use that revenue as well as deficit spending to upgrade the country’s infrastructure and shift to a clean-energy production, creating jobs in the process.

However, economists note increasing regulations — like those Biden has proposed to cap carbon emissions — will likely increase some costs for consumers. But Biden argues that without intervention, the cost of climate change will be much higher in the long run, and experts say it’s already contributing at least in part to an uptick in billion-dollar weather disasters.

Biden supports a $15 minimum wage. Trump has also considered backing the Democratic proposal in the past, but has not publicly endorsed it.

Trump is promising to build on what many see as his crowning legislative victory — the 2017 Tax Cuts and Jobs Act (TCJA), which rolled back taxes for both individuals and businesses.

The cuts reduced the corporate tax rate from 35% to 21% and lowered most personal income tax brackets. Although, they greatly increased the federal deficit he promised to wipe out. Trump credits those cuts for boosting the economy and lowering the unemployment rate to 3.5%.

While the complexity of the 2017 reform and limited available data makes its impact difficult to fully assess, Biden and others on the left contend those cuts disproportionately benefited corporations and the wealthy, and has pledged to undo some of them. He says he will keep the cuts for middle-class, while significantly raising taxes on companies and individuals making more than $400,000 a year in order to fund education, health care and other social programs.

A number of tax policy think tanks say that some of Biden’s proposals could unintentionally result in some households seeing their taxes slightly increased. Biden has also said he would reinstate the individual mandate — the penalty for not having health insurance created by the Affordable Care Act that was eliminated by the 2017 tax cuts, a move that exposed the health care reform law he plans to build on to greater Constitutional challenges.

However, Biden says he also aims to reduce some taxes. He said he would repeal the $10,000 cap on the state and local tax deduction instituted by the 2017 bill, which primarily impacts high-income households in areas with high state taxes, like California and New York. He also plans to offer tax credits aimed at accomplishing different policy goals — such as reinstating or expanding incentives intended to reduce carbon emissions and helping low- and middle-income families offset the costs of home buying.

One area the candidates’ tax plans differ starkly is capital-gains — taxes paid on profits realized from the sale of real estate, stocks, or other assets.

Republicans have long seen capital gains tax cuts as a way to spur new economic activity, but didn’t change the rules when they passed TCJA. Trump now wants to lower the top rate of those taxes from 23.8% to somewhere between 15% and 18.8%.

The president also says he want to expand Opportunity Zones, a federal program that provides tax incentives — including deferrals on capital gains taxes — for investors that fund projects in underserved communities.

Biden has said he would limit the Opportunity Zones program, which critics contend provides financial boons for wealthy investors without guaranteeing any benefit for distressed neighborhoods. Instead, he would direct the Department of Treasury to ensure “tax benefits are only being allowed where there are clear economic, social, and environmental benefits to a community, and not just high returns,” according to his platform.

Biden also intends to nearly double the top capital-gains rate to 39.6%; that rate would apply only to households with income exceeding $1 million.

How to handle foreign trading partners may be the area of the candidates’ agendas that overlaps the most, but there’s still a world of difference.

Trump made “America first” a pillar of his 2016 campaign, and has largely kept his promise — even if it has had mixed results for the economy.

Both countries imposed tariffs on hundreds of billions of dollars’ worth of each other’s goods. The cost of the tariffs imposed by the U.S. was almost entirely absorbed by American businesses and consumers, according to analysis by the National Bureau of Economic Research.

In January of this year, the U.S. and China signed a phase one trade deal, dialing down some of the disputes. However, talks toward another agreement have sputtered, while tensions between the countries remain high.

But Biden has also vowed to be tough on China. He called Trump’s trade war an “unmitigated disaster,” but says he will “take aggressive trade enforcement actions against China or any other country seeking to undercut American manufacturing through unfair practices.” He has also not definitively said whether he would eliminate Trump’s tariffs on the countries.

Biden is unlikely to take on China alone — he has said he would work with U.S. allies to curb economic interference from Beijing.

On day one, whichever candidate is elected is likely to prioritize bringing economic activity back to the U.S. above trade with foreign partners.

Both Trump and Biden say they will offer incentives for bringing jobs back to the country, while imposing penalties for offshoring.

US produced more plastic waste in 1 year than any other country on Earth: Study
Christmas on the couch: ABC announces lineup of holiday programming
Netflix raises subscription prices on two popular plans
Paul Rudd brings cookies to voters waiting outside in the rain
Election 2020 live updates: With four days to go, Trump, Biden blitz Midwest
Lil Wayne meets with Donald Trump on plan for Black America days ahead of election