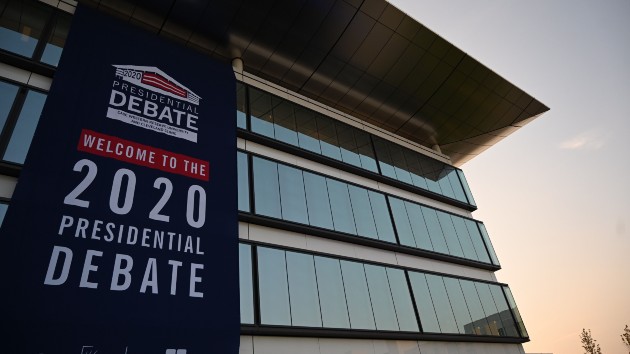 (CLEVELAND) — President Donald Trump and Democratic nominee for president Joe Biden will face off from a social distance in the first presidential debate of 2020 on Tuesday night in Cleveland, just five weeks out from Election Day.

The first presidential debate at Case Western Reserve University and the Cleveland Clinic comes on the heels of bombshell reporting from The New York Times on two decades of Trump’s tax records, ahead of a contentious Supreme Court confirmation process in the Senate and as the latest ABC News/Washington Post poll shows Biden maintains a 10-point edge among both registered and likely voters.

The coronavirus pandemic’s impact on the race will also be on display as the two candidates won’t partake in a handshake, customary at the top of such events. The size of the audience will also be limited and everyone attending the debate must undergo COVID-19 testing and follow other public health protocols.

The debate’s moderator, Chris Wallace of Fox News Sunday, selected six topics for Tuesday with each segment expected to get approximately 15 minutes: Trump’s and Biden’s records, the Supreme Court, COVID-19, the economy, race and violence in U.S. cities, and the integrity of the election — the final topic coming as Trump over the weekend wouldn’t commit to a peaceful transfer of power.

Here’s the news leading up to the debate. All times Eastern:

When President Donald Trump and former Vice President Joe Biden share a debate stage for the first time Tuesday night, a key audience for both candidates will be suburban women voters in a handful of critical election battlegrounds.

ABC News Live recently met with five women voters from diverse backgrounds and political views in the suburbs around Minneapolis to discuss the 2020 campaign and issues important to mothers, young female professionals and retirees across the state.

They described anxiety over a year of cascading crises for their families, from the pandemic and recession, to protests for racial justice, a spike in violent crime and looting and a sudden vacancy on the U.S. Supreme Court.

Sep 29, 8:35 am
Some Trump top advisers expect a dominant performance by president

President Donald Trump is set to enter the first presidential debate on Tuesday down in the polls, but coming off the high of nominating his third Supreme Court justice. Some top advisers expect a dominant performance by the president, despite the opposing narratives of attacks on Joe Biden’s mental state and the Trump campaign’s work to raise expectations for the Democrat ahead of the showdown.

With days to go the debate, Trump has carried out conflicting and confounding strategies both repeatedly targeting Biden’s mental acuity, claiming at a recent rally he doesn’t know he’s alive, while also making passing attempts to boost the former vice president as a seasoned debater who could outshine him.

At a campaign rally Saturday night in Pennsylvania, the president both attacked Biden as “dumb” before immediately lauding him as an experienced debater.

Biden has brushed off Trump’s onslaught of attacks on his mental fitness.

“Watch me, Mr. President. Watch me. Look at us both, what we say, what we do, what we control, what we know, what kind of shape we’re in,” the former vice president said when asked by ABC News about the president’s attacks on his cognitive ability.

While some advisers tell ABC News they’re nervous as the president enters his first debate since his encounters with Hillary Clinton four years ago — with Biden having participated in nearly a dozen debates leading up to clinching the Democratic nomination — others are anticipating a knockout performance by the president and expect the debate to help highlight the former vice president’s gaffes, sources familiar said.

The debate between Trump and Biden will run from 9 p.m. to 10:30 p.m. with no breaks for commercials.

The program will be divided into six segments of 15 minutes each, according to the Commission on Presidential Debates, with topics decided by the moderator.

Topics for Tuesday night’s debate are:

Sep 29, 7:15 am
Commission on Presidential Debates: Don’t expect moderators to be ‘fact checkers’

Viewers tuning in Tuesday night may anticipate moderator Chris Wallace to fact check the candidates in real time, but the Commission on Presidential Debates (CPD) attempted to manage those expectations over the weekend.

“There’s a vast difference between being a moderator in a debate and being a reporter who is interviewing someone,” CPD co-chair Frank J. Fahrenkopf Jr. said Sunday on CNN. “We don’t expect Chris or our other moderators to be fact checkers. The minute the TV is off, there are going to be plenty of fact checkers in every newspaper and every television station in the world. That’s not the role, the main role, of our moderators.”

Wallace — who received widespread praise for moderating the third and final 2016 debate between Trump and Hillary Clinton — also said Sunday on Fox News that his job as a moderator is “to be as invisible as possible.”

“I’m trying to get them to engage, to focus on the key issues, to give people at home a sense of, ‘why I want to vote for one versus the other,"” Wallace said.

A one-hour special, Trump vs. Biden: The Main Event – A Special Edition of 20/20, kicks off network coverage at 8 p.m. ET. The program will set the stage for the critical night for both candidates, reporting on the latest developments from the campaign trail, the stakes for both campaigns and the most important issues to voters across the country.

Pre-show coverage will begin at 7 p.m. on ABC News Live.